Amnesty is not the Answer to Illegal Immigration 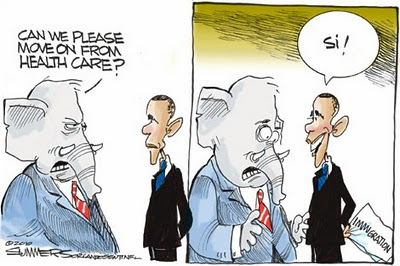 It is if you are stealing the votes. Something they are very good at and have been doing for a very long time.That and other nefarious actions.

The real truth is that there are over 20 million plus illegal aliens in this nation. They have all spat on our sovereign laws, our flag, and our constitution to break into America. Then demonstrate in our streets, branding foreign flags and demand their Civil rights. The intention was there, no matter the cause to enter America without means of financial support. The cesspool of businesses that employed foreigners, rather than a US citizen-resident cannot be forgiven and there should be a composite of heavy fines, business asset confiscation and imprisonment? There should be no conciliation for gainfully profiting on the backs of their own people? An estimated eight million foreign nationals have jobs, while the number of Americans seeking work is over 15 million and still accelerating.

Another grand travesty is that the US State Department issues approximately 1.5 million work visas annually. I agree as the majority of Americans that we can always make room for highly intelligent, skilled workers that can be elusive commodity in our country. But what we--DON'T-- need are mediocre immigrant job seekers from other lands that our own workforce must teach job skills, before those employees receive a pink slip. Immigration attorneys have been proven time and time again on fudging a person’s qualifications, to import into this country, large contingents of low skilled legal immigrants from countries with impoverished wages. The biggest issue here businesses cut jobs, and the low skilled are the first to go. That means the taxpayer becomes the payee of hundreds of thousands of people, who ultimately end up in the government entitlement programs.

The E-Verify program with successful modifications could be used to disclose illegal immigrants, defrauding the welfare benefits system. ICE should recycle audits and even make lightening raids on previously visited companies. E-Verify must be instigated permanently and not a voluntary illegal alien reducer in auto licenses, vehicle registration, health care and other pertinent identification processes. Whereas the highly, technically skilled soon find a new employer. THE MAJOR PROBLEM IS, WE CAN DO WITHOUT THE LANDSCAPERS, JANITORS, AND CONSTRUCTION LABOR, AS WE HAVE MILLIONS OF US CITIZENS-RESIDENTS WHO CAN DO THESE MANUAL JOBS? The real $ cost of the illegal alien invasion has remained intentionally undisclosed by our Senators and Congressman. Few states admit the expenditures, especially California?

Arizona legislators have seen the financial errors caused by blanket immigration to that state. Finally it will be signed into law by Governor Jan Brewer, the most restrictive measures to give law enforcement the ability to question any individual they deem as suspicious of illegal entry. Condemnation is already appearing from the National media generated by the open border advocacy organizations.ONE THINGS FOR SURE, THAT IF THE PEOPLE OF ARIZONA DIDN'T WANT THIS LAW PASSED? IT WOULD NEVER EVEN HAVE BEEN CONSIDERED? Illegal immigration has become a nationwide battleground and the economic aspect it, would pay for all our foreign wars? Arizona illegal immigrants who realize their time is up, will now flood California as there is no enforcement there. Everything goes? Including citizens-residents welfare befits for illegal aliens.That why the Sanctuary State has massive deficits? Years of complete and utter irrelevance has allowed this illegal occupation to happen.

To even consider another mass amnesty is beyond outrageous, beyond anything comprehensible. Our Lawmakers, who are subservient to the moneyed open border lobbyists or the radical ethnocentric organizations, WILL BE REMEMBERED IN UPCOMING ELECTIONS. Sen. Harry Reid, Pelosi, McCain, Schumer, Graham the Pro-Amnesty incumbent will be removed. Unless the high population of illegal aliens in Nevada vote for him? Yes! They will vote. A growing list of pro-amnesty, anti-sovereignty politicians is visible at NumbersUSA. TO RECAP ILLEGAL IMMIGRATION ENFORCEMENT IS ONLY SEEN TO WORK? IN FACT IT HAS NEVER BEEN ENFORCED. WE HAVE BEEN CHEATED FOR DECADES?


Can be distributed freely. Never any copyright.

>"ONE THINGS FOR SURE, THAT IF THE PEOPLE OF ARIZONA DIDN'T WANT THIS LAW PASSED? IT WOULD NEVER EVEN HAVE BEEN CONSIDERED."

Are you serious? Bite your tongue! Don't the people of this country now have healthcare reform that most people didn't want?

You must be assuming that legislatures reflect the will of the people. Maybe that was true many years ago, but not any longer.

I'm not arguing either for against the new AZ immigration law, mind you, I'm just arguing against the idea that laws reflect the will of the people these days.