A Thousand More Days of Damage 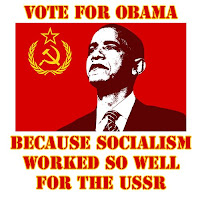 On Saturday, April 24, President Barack Hussein Obama, will have one thousand days left in which to ruin America.

As we know from his first fifteen months in office, he is capable of doing a lot of damage. This is rather extraordinary insofar as he only had 142 days as a U.S. Senator before he was inaugurated.

He has had the support of a majority of Democrats in the House and Senate, but he has set the agenda. The result is trillions of dollars of debt, despite the fact that the banks and investment houses have all paid back the TARP funds they received.

We know the “stimulus” billions had little or no effect on the economy because the rate of unemployment has risen continually since he took office and is like to exceed Depression era rates by the time he leaves.

We know he reneged on a missile defense system for Poland and Czechoslovakia that would have been a deterrent to Iranian missiles (that could reach the U.S.) and Russian ambitions to gain control again of Eastern Europe.

We know he has taken control of General Motors and his “reforms” of the nation’s healthcare system puts one-sixth of the nation’s economy under government control. In an unfolding chapter of our history, twenty States have signed onto a court challenge to nullify Obamacare.

We know he is now seeking control over Wall Street. Legislation for its “reform” and it will give the government extraordinary and unwarranted powers. It will likely be rammed through the Senate in a week or so.

We know that his administration is doing nothing to secure the nation’s southern border and is likely to ram through “amnesty” legislation that is opposed by as wide a margin of Americans as was healthcare reform.

We know that he wants Cap-and-Trade legislation which would declare carbon dioxide (CO2) a “pollutant” even though it is vital to life on planet Earth, but more importantly, its regulation would give the Environmental Protection Agency control over all energy use, generate billions in the biggest tax on energy ever enacted, and further kill the economy as manufacturing flees for other nations.

We know he wants to close down “Gitmo” and likely place known terrorists in federal prisons where, of course, they will be able to claim Constitutional rights. Many of those released from Gitmo are known to have returned to the battlefield.

He will have accomplished much of this in just over 450 days in office so another thousand, unless he is deterred by a Republican-controlled Congress, will magnify this horrendous level of damage.

Who would have ever believed that a majority of American voters would elect a President who hates America?

I wonder how he's going to deal with Arizona's new laws on immigration. He already called the state lawmakers "misguided." Considering what the residents are going through in our southern border states, it seems Arizona had no choice.

Patricia:
Obama just doesn't care about the problems Arizona and other border states are having. If your agenda was to destroy the nation, would you?

Alan, I couldn't agree more wholeheartedly. However, I am becoming a little more hopeful as of late.

I suspect that there are millions of Obama voters out there who were just so obsessed with their hatred for George Bush that they failed to see Obama for who he really was. Once the realities of what Obama is doing to America set in, and George Bush isn't so fresh in their minds, I think there will be a significant backlash.

Luckily, Obama is doing a GREAT job of bringing people to their senses. The speed and arrogance with which he's ramming his agenda through is enough to make even the most liberal of voters uncomfortable. Anyone that actually cares about our Constitution and American values simply can NOT be happy with what this administration is doing to the American way of life, or the WAY it's doing it.

Many moderate Republican or centrist Democratic voters may have fallen for Obama's grandiose promises, and may still support SOME of his agenda, but it's clear that most aren't getting anything close to what they bargained for and they're not happy about it.

I've never seem a President tell so many blatant lies or backpedal on so may promises in such a short time, and I'm convinced that a large number of people are disgusted and offended by that. Surely, a lot of them must regret voting for Obama now, and will be eager to correct their mistake, won't they?

With any luck, the Democrat's attempts to corrupt our voting process will fail, and the next election will strip the Obama administration of enough power to keep them in check. Then, come 2012, barring any sneaky tricks, there should be more than enough "American minded" voters out there to defeat Obama and put an end to his attack on America.

I don't think there's any doubt that, at least for the moment, there are more Patriots than Socialists in America. If not, well then frankly, we've lost our country without a shot being fired, and we're screwed.

>"I don't think there's any doubt that, at least for the moment, there are more Patriots than Socialists in America."

I only hope you're right, Guy, but there is also another group that appears to be only brain dead.

I often encounter people on other blogs who appear to honestly believe that the US Constitution is contained, in total, in the Preamble, and the rest is just addenda. They think the cover letter is what we live by.

They believe, among other things, that the Constitution is a "living breathing document", and must evolve as times change, that nothing so archaic cold possibly apply today, and that it obviously couldn't grant rights to things like prescription drug coverage, because prescription drugs hadn't been invented yet. It is impossible to have a meaningful discussion with someone like that.

To these people the concept of rule of law is beyond comprehension, as are natural rights, property rights, and the God given right to self defense as affirmed by the 2nd amendment.

It's possible that these zombies plus the socialists outnumber us. I pray it isn't so.

Alan, you mentioned that GM has paid its loans early, but were you aware of where they got the money?

Why don't I see more about this in the mainstream news?

Things may be worse than we thought.

Well Ron, if they do outnumber us, then we are looking at some hard times ahead. We'll have a choice ... either admit defeat and live in a Socialist country, or fight to change it.