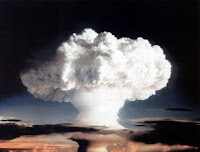 Since taking office on January 20, 2009, President Obama has engaged in one form of incremental surrender and betrayal after another, letting our allies know the United States is not to be trusted to protect them and our enemies know they need only wait for our troops to depart.

The latest tiny surrender was Obama’s pledge that the United States will not use nuclear weapons against none-nuclear countries no matter what weapons they choose to use against us. In plain terms, our nuclear weapons may well be the only thing restraining the bad intentions of any number of despots worldwide.

It should be noted that Obama’s new policy leaves our strategic nuclear weapons in place, but limits further development and testing. As The Washington Times noted, “American is taking a pledge to pursue nuclear obsolescence.”

Obama’s policy ignores the fact that our current enemies are not states, but stateless terrorist Islamist organizations with state sponsors. They have made it clear that they would love to get their hands on a small nuclear weapon or on biological/chemical weapons with which to inflict death on the scale of 9/11 or larger.

This kind of empty and stupid posturing may make Obama feel like a great global leader, but in practical terms it does nothing to assure our allies that he has the stomach to retaliate against their enemies and ours.

There’s a reason there has not been a World War Three. It begins with the U.S. arsenal of nuclear weapons. It kept the Soviets mindful of their own destruction until their system collapsed under the failure of communism.

To fail to understand that America has been the global policeman since the end of World War Two is to ignore the benefit this has brought to the world despite the difficulties encountered in Vietnam in the 1970s and Iraq in this decade.

The U.S. armed forces, its Army, Marine Corps, Air Force, Navy and Coast Guard, represent more than three million personnel on active duty, the vast bulk of whom are stationed within the U.S. with others in Hawaii, Alaska, Guam, and Puerto Rico. The rest are at sea protecting the vital lanes of commercial traffic around the world and showing the power of the U.S. to those who might think about challenging it.

Deployments include, of course, those in Iraq and in Afghanistan, but the U.S. also has more than 56,000 in Germany, 33,000 in Japan, and around 30,000 in South Korea. There are fairly sizeable units in England and Italy. There are units through East Asia, North Africa, the Near East and South Asia, as well as sub-Saharan Africa.

When Obama made his speech regarding the decision to increase our presence in Afghanistan he used West Point cadets as the photo backdrop. He used the return of a casualty of war as a photo opportunity showing him saluting military-style.

It is all symbolism without substance and it is obscene.

This president gives every indication of having no real heart for combat. He has demonstrated a knack for picking the wrong side in a fight whether it’s a Fidel Castro- wannabe legally exiled from Honduras or the decision to withdraw a nuclear umbrella from former Soviet satellite nations in Eastern Europe.

He is utterly clueless regarding the lessons previous U.S. presidents have discovered. The Middle East only responds to power and force.

Diplomacy produces nothing but stalemate in the Middle East and that is often the best outcome one can accept.

A case in point is our traditional and most reliable Middle East ally, Israel, whose prime minister was recently treated in an extraordinarily shabby fashion by Obama as if to deliberately signal the Palestinians, the Iranians, the Syrians and others whose “side” he’s on.

Since 1947 no amount of negotiations and diplomacy have moved Israel’s Palestinian and Syrian enemies any closer to peace though, after having been thoroughly defeated in war, both Egypt and Jordan did accept peace terms.

Apparently, only after Iran nukes Tel Aviv will the new Obama doctrine be debated for several weeks concerning an appropriate level of retaliation. This is a president who, even though a bi-partisan Congress has passed tough sanctions against Iran, hasn’t found time to sign off on them.

It you want World War Three, you need only wait for Obama to force Israel’s hand to attack Iran’s nuclear facilities for lack of any other option. They have previously done this in both Iraq and Syria.

Obama has proven to be a disaster for the nation on so many levels and in so many ways that observers can only watch and wonder what this demented socialist flower child and his cronies will do next.

"the United States will not use nuclear weapons against none-nuclear countries no matter what weapons they choose to use against us."

I hope that means we have some kick-ass chemical weapons or biologicals to use on them instead.

Or maybe something space-based...reentry at 30,000 mph can do as much damage as a nuke, right?

Obama's all-to-obvious weakness to stand up to his foreign opponents bodes ill for the fortune of the Left in country, because an increasingly radical Right that already poses an impressive political challenge to his continued Leftist rule that may result in the destruction of socialism as a viable political movement in this country.

I don't think a weakling beta male like Obama has the stern stuff to stand up successfully to an angry Right Wing of radical alpha males and females any more than Louie XVI had the guts to confront the French Revolutionists in 1789.

Middle-eastern culture seems to be based on machismo. Bluster is part of the style of pushiness, and the languages lend themselves to insult and to circumlocution as well.

To be accomodating, generally, is seen as being weak.

In the Great Game of international chess, perceived weakness is about like spotting one's opponent a knight or castle...

Once again, you're so right, Alan. Is there even ONE thing that this hideous sham of a president can get right? Is he going to screw up on a scale of huge magnitude on every last thing he does? I can't imagine that there's ever been a worse president. He combines both stupidity AND malevolence. Or maybe he's not stupid, just purely malevolent, willfully & purposefully making these insane choices, which is even worse.

Obama is in control of the situation, and has your best interests in mind. Now move along. There's nothing to see here ....