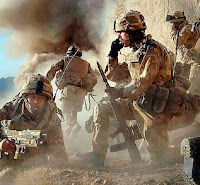 I come from a generation, just as several before it, that was drafted into military service. The Draft, conscription, goes back to the days of the Civil War and, before that, it was understood that able-bodied men would serve in militias.

After the Pearl Harbor attack on December 7, 1941, many American men lined up around the corner to volunteer to fight the Japanese. Others would be dispatched to the European theatre of war to fight the Nazis.

The “greatest generation” fought and won. They did it by being absolutely merciless toward our enemies because that is the only real rule of war. Kill them before they kill us. Lose the war and you are their possession, their slaves.

World War Two was all-out war with civilians dying in the hundreds of thousands because the people’s will to fight on had to be extinguished. Dresden was bombed to dust; Berlin became a shell of shattered buildings. As American forces waited to invade the homeland of Japan, President Truman ordered the bombing of Hiroshima and, when the Japanese emperor and generals still refused to meet the terms of unconditional surrender, he bombed Nagasaki. World War Two ended.

Shortly after the end of World War Two in 1945, the Korean War began when North Korea invaded South Korea on June 25, 1950. That war drew Americans back to a new battlefield until, on July 27, 1953, a truce was signed. The two Koreas are technically still in a state of war because no peace treaty exists.

Then, of course, for most Americans today there was the Vietnam War. Whether of the generation who fought it or those born after it, the Vietnam War remains the war we lost. It remains a cauldron of debate over its conduct. What emerged from that war, however, was an all-volunteer military, a warrior class.

Over the years of the Iraq-Afghanistan conflict I had occasion to write that these were the wrong wars in the wrong places, that the U.S. was wasting its treasure and young men (and women) there. I think, on reflection that I was wrong.

I think, now, that even this veteran of the U.S. Army, drafted in the 1960s, simply grew weary of these wars and neglected the broad history of conflicts dating back to biblical times.

A friend of mine, a professional soldier who served for 25 years, had this to say:

“When I first came in, the drill sergeants, platoon sergeants and sergeants majors were all ‘Nam vets and they all told us the same thing; we are an all-volunteer Army, none of us were drafted; having served in a conscript Army they all said that we wouldn’t want to be in conflict with a bunch of draftees who did not want to be there. They told us about disciplinary problems in the draftee military you would not believe.”

“The war we are currently engaged in is The One Hundred Years War and the sooner the American people get used to that, the better. I do not differentiate between the ‘Iraq War’ and the ‘Afghanistan War’; they are simply different theaters of the same war.”

In his new book, “Kaboom”, Matt Gallagher traces his transformation from an ROTC college graduate to his battlefield experiences in Iraq. He wrote:

“As I watched the platoon joke, clown, and ramble their way through the holiday dinner, I couldn’t help but think about the country that had produced them. These were the men in the flesh that society only celebrates in the abstract.”

“The NCOs had served in the army long enough to stop caring about the whims of the American culture they protected so effectively; the joes were just removed enough to not fully recognize how the same society that reared us had detached itself from us the day we signed our enlistment papers. In a voluntary military, we fought for the nation, not with it.”

Americans, most of whom honor our troops, have not had our lives personally touched by the Mideast conflicts. The way of life they are fighting to protect has barely been altered as they put their lives on the line every day in a combat zone or service in any of the branches.

Under such circumstances, it is easy to forget there are countless enemies, mostly Muslim, striving to bring down America and to kill us in the same fashion as they killed some three thousand of us on a single day at the beginning of this decade.

Withdrawing from conflict zones in Iraq and Afghanistan may seem like a good idea, an end to our casualties in battle, but those who are there, our warrior class, know that it would just be a brief cessation of what will be a very long war we cannot dare to lose.

This is who we are and this is what we do. I think (know) that we will always need out warriors but also that things should be set-up like in Israel and everyone of both sexes and age 18 should be required to serve. Not sure but the age in Israel may be younger than 18.

Yes, America will always need its warriors, but the comparison with Israel doesn't work for me because that tiny nation is literally surrounded by enemies with a long track record of having attacked it in the past and never really ceasing terrorist and rocket attacks;

Under those circumstances, their younger generation must be trained, armed, and commanded by officers who must be ready 24/7 for the next attack.

The opinion of many experts on today's military that I sought is that we are better off without an army of draftees...and that we shall be in combat for a very long time to come with the Islamist enemy.

My commentary was just my way of paying tribute to our troops.

Excellent post, Alan. Let us pray the Gramcian education our youths have been subject to will not eventually decrease the numbers willing to serve voluntarily. No signs of that yet, although the proportion of Blue state volunteers lags far behind that of the Red states.
Hollywood and the other media will, of course, continue to do their best to denigrate military service.

Utter BS man.We have never had any business in Iraq or Afghan nor can the US afford it. You get alot right but totally messed up here.

Fred, we shall agree to disagree on this one.

By accident of birthdate I did not get greetings from Ike until November, 1953. My duty in Korea was occupation, not combat.

I prefer to learn vicariously, thank you.

My view of Vietnam, Iraq I and Iraq II has more to do with the "how to" and less with the "whether to". Granting that hindsight is 20/20, but learning from mistakes is a slow and difficult effort.

Howsomever, today's actions in Afghanistan are but part of a resurrection of the Jihadist war that last was halted by El Cid. I find it ironic that it's the developed world's appetite for oil which has provided the funding.

I can recall while stationed at Ft. Devens, Massachusetts in late 1966 and early 1967 attending the U.S. Army Security Agency ELINT school that so many deserters were in custody that an annex to the Post Stockade had to be opened. I remember one early morning several troops broke out of the annex near our company and we woke up to the sounds of MPs (military police) firing shotguns at the fleeing soldiers who were quickly stopped and returned to custody.

We called this event, "The Great Escape" after the famous Steve McQueen movie of that title.

Later that same day I had a brief chat with an MP at the front gate who told me that all army deserters from the East of the Mississippi were processed thru Ft. Devens, the only active army base in New England. In 1966, the MP sergeant said 25,000 deserters were processed at Ft, Devens. In 1967, the MP Battalion (that included the Stockade guards) expected over 50,000 at the rate of desertion.

The MP sergeant went on say that well over 99% were draftees and the majority of those on orders for Light Weapons Infantry in Vietnam. I understand that after another boot camp at Devens, the deserters were given one last chance to serve in 'Nam. Those who refused were given a courts martial and sent to hard labor at Leavenworth.

Hell of a thing for a Free Republic to literally force someone to fight and maybe die for their country! If we cannot find people willing to volunteer to defend the country, we do not deserve to be free.