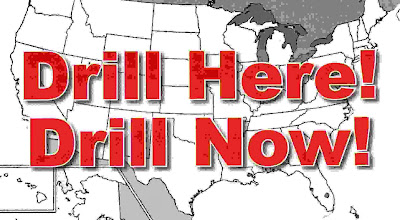 The Obama administration announcement that it intends to lift the ban on offshore exploration and drilling came as a big surprise, albeit a welcome one.

In an early March editorial The Washington Times noted that, “Within a month of taking office in 2009, Mr. Salazar (Secretary of the Interior) froze drilling leases already approved by the outgoing George W. Bush administration. Then he imposed a six-month public comment period to precede his decision on whether to allow new drilling. When the comment period ended in September, Interior suppressed the results.”

“The comments, totaling 530,000, favored drilling by a margin of 2 to 1. Even now,” said the editorial, “six months after the public comment period, Interior—apparently displeased with the results—still has not published the public reaction.”

And, of course, Obama campaigned on restricting access to our own oil. Why don’t we find it unusual any more than absolutely nothing the man ever said in the past is not subject to revision and, therefore, untrustworthy?

For an administration that is often disdainful of public opinion, this reversal on offshore drilling is quite stunning and, of course, raises the question why. I do not even pretend to know. One can speculate that the huge new reserves of oil being found around the world makes it difficult to explain a refusal to drill for any of our own oil.

Others explain it as a political decision designed to encourage those members of Congress who do not want to vote for the Cap-and-Trade Act that is festering in some dark corner of the Senate. It is suggested that either the act gets passed before the November midterm elections or it will never be enacted. There are also fears being expressed that the Environmental Protection Agency will assert regulatory powers to limit carbon dioxide emissions without waiting for Congress to act.

Suffice it to say that Cap-and-Trade would be one more nail in the nation’s fiscal coffin. It is so awful an entire commentary will be needed to reveal its hideous details.

Since the days of Jimmy Carter, successive administrations have failed to address the vital necessity of opening our own vast reserves of oil despite the nation’s increasing dependence on imports. Bush did not act until the very end of his second term.

The current administration is lying, as usual, about the estimated amount of oil domestically and offshore. However, a U.S. Geological Survey and the Minerals Management Service set the figure to be 167 billion barrels of oil, not the 21 billion currently being cited. The estimated amount is the equivalent of replacing America’s current imports from OPEC countries for more than 75 years!

In December of 2009, Rasmussen Reports released a poll that found that nearly seventy percent of Americans supported responsible offshore energy exploration and production. That’s the kind of majority that is hard to ignore.

In September 2009, President Obama went on record in a speech at the United Nations saying, “I will work with my colleagues at the G20 to phase out fossil fuel subsidies so we can better address our climate challenge.”

That “climate challenge” disappeared in November 2009 when a leak of emails between scientists for the United Nations Intergovernmental Panel on Climate Change revealed they had been cooking the data on “global warming” for years, deliberately misleading the public and fellow scientists. They also worked to suppress the publication in science journals of any research that threatened their scam.

So, maybe, as the nation hurtles like an asteroid toward higher unemployment, insolvency and default, somebody in the White House noticed that America’s oil and gas industry represents nearly seven percent of the U.S. economy and accounts for more than nine million permanent, good-paying jobs.

While we’re discussing the subject, it’s long past time to stop calling oil and natural gas “fossil fuels” as if they are the result of dead dinosaurs. Geologists are increasingly of the opinion that the Earth naturally and continually creates oil and gas.

The author, Dr. Jerome Corsi, has written that “Abiotic oil theory postulates that oil is formed on a constant basis deep within the mantle of the Earth, requiring no deterioration of biological materials to produce oil.”

In short, there is no such thing as “peak oil”, yet another Green lie intended to make people think we are running out of the stuff, Dr. Corsi points out that in 2008 The Wall Street Journal reported “sixteen discoveries of large oil reserves were found in the Gulf of Mexico, largely due to advances in deep-water drilling technology.”

These days reports of such discoveries around the world are routine. In 2007 Brazil announced one such offshore oil field estimated to contain eight billion barrels of oil, enough to expand its 14.4 billion barrels by nearly half.

It will be years before any of the newly permitted exploration and production in East and West Coast areas translates into gas in your auto, as heating oil, or any of the countless other uses of oil. But it’s a start.

This has to be another red herring, put out for purely political purposes. As the idea moves forward, he will attach something like cap-and-trade to it, or insist that the platforms be powered by windmills, or some other such nonsense. Always look behind the statement for the ulterior motives this man has. Take nothing he says at face value.

>"Always look behind the statement for the ulterior motives this man has. Take nothing he says at face value."

It's a sad day when we all agree that the President of the United States of America is an unapologetic liar with a Progressive agenda. We are prudent to trust nothing he says.

How did we get to this point?

Good article. Thanks for highlighting the abotic theory of petroleum. This is a theme I have touted for years in my blog and newsletter. They have had peak oil predictions forever and we not only did we surpass those peaks the next peak prediction was amazingly higher than the last peak predicted, which we surpassed…and so on and so on.

The debate still rages, but the idea that natural gas and oil really are formed in the Earth’s crust and not “fossil fuels” is becoming accepted. It might be noted that originally this theory was called the Russian/Ukranian abiotic theory of petroleum and they found oil based on this theory. Russia is a major oil producer as a result.

At the same time Obama blew this smoke, he cancelled four leases in the Alaskan area and deferred othe programs until around 2014.

That one believes or disbelieves the idea of Peak Oil is irrelevant. What's an absolute certainty is that the cheap oil has been found and mostly used.

People talk about the Bakken formation. Sure, lots of oil. The three Ps of the awl bidness, permeability, porosity and pressure, aren't there. Well yields will be small on a per-well basis.

Deepwater offshore development is a ten-year process and longer, and is not profitable if oil is below around 80/bbl in today's dollars.

Existing oilfield production is declining faster than new discoveries are being brought on line.

Hunt up Napoleon's comment about time. That's what we're just about out of.

I don't believe it for one minute Mr. Caruba. Obama knows that the EPA will never allow it, and neither will the green freaks. He's doing it for political purposes only, so when the oil and gas prices rise more, he can blame it on the oil complanies, while saying "Hey, I tried". Just another lie from the pro. And I thought Clinton was the boss pro! God Bless!

No Carolyn, Obama has cornered the market on lying. It's absolutely mind boggling how many lies he's told, and how boldly he's told them. But as the old saying goes ... "Fool me once, shame on you. Fool me twice, shame on me".

I really have to fault the American public for sitting idly by and doing nothing as these lies are exposed one by one. Is it fear? Is it complacency? Or is it just denial? I know I have a hard time believing that we have someone so corrupt in the White House. I think people just don't want to accept it. It's very embarrassing, and depressing too.