How to Spot "Green Talk" 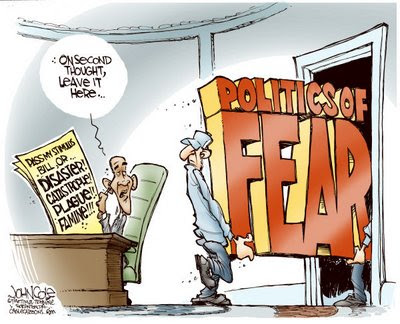 Aside from the idiotic claims that environmentalists like Al Gore regularly make to justify their various scams and schemes, anyone who has devoted any time to reading the huge volume of lies they put forth begins to notice the constant use of what I call “Green talk.”

I am hardly alone in this and a friend of mine, Rich Kozlovich, has actually made a list of favorite phrases he identifies as the weasel-words and phrases Greens favor. With his permission, I will share some of it.

In no particular order, if you read or hear any of the following, it is a warning sign that there is little proof to support whatever is being claimed:

Might cause
Could cause
Studies suggest
Linked to
Voiced concerns about
Expressed some concern
Experts fear
The long term effects are unknown
Negligible concern is still expressed about X
Minimal concerns
Still leaves doubts
Some scientists were critical
Researchers hypothesize
Suspected hormonal imbalance
Many scientists say
Still, some environmental substances remain suspicious
May make women more likely to
Probably to blame
Ecologists are worried that
Has the potential to significantly promote
Factors suggest
There is a serious connection to
Mounting evidence that these chemicals "may trigger hormonal changes"
Contrary to the overwhelming impression conveyed by scientists and politicians
Scientists say or science says

Phrases that are commonly used to arouse fear include the following:

Data is yet inadequate to make a judgment, however the weight of the evidence says we have a problem

Government scientists cautioned that their finding is highly preliminary because of the small number of women and children involved and lack of evidence from other studies.

While further study is needed to understand the impact, it is unlikely (or likely) that

While voicing caution on the link to (X), concerns were widespread that, if left unregulated, (X) could hurt the environment.

The simple truth is that the way we allow chemicals to be used in society today means we are performing a vast experiment, not in the lab, but in the real world, not just on wildlife but on people

In 1990 I founded The National Anxiety Center as a clearinghouse for information about “scare campaigns” designed to influence public opinion and policy. Its website is an archive of some of my writings over the years.

The sheer volume of bogus claims has required me to blog daily to debunk the many manifestations of Green talk to advance nutty and dangerous campaigns such as a “global warming” that involves destroying our economy to reduce greenhouse gas emissions.

Much of what passes for environmentalism is entirely fear-based and, as such, exists to hide a political agenda to use government at all levels from the federal to the local to enact laws and regulations that require people to take actions that, as often as not, lack any scientific, economic, or civic justification.

To make matters worse, they often come with unnecessary and wasteful costs. It is a deception to distract you from the actual purpose; to control over your life and your choices.

It is snake oil. Don’t buy it.

Clearly it is the goal of the American Left, in which environmentalism is the new dogma replacing Marxism, to repeal the Industrial Revolution and turn back the clock to the Age of Feudalism ruled by Leftist Robber Barons living large in the castles on the hills while looking down with contempt on the "little people" they have reduced to poverty, hunger and disease.

The future looks like the past unless we act in this generation like the patriots of the past when faced with treason on a massive national scale.

Mr. Rich forgot..
the check's in the mail.
I'll still respect you in the morning.
..no, those jeans don't make you butt look bigger.
..trust me.
,just to add a few.

Hey now, don't bash snake oil. It was an important source of omega-3 fatty acids for the human species as our brains got bigger.

One of my favorites is the call to action:

As soon as I see the "We Must...", my BS detector switches on automatically, and I actually read:

"We must be very skeptical of whatever we are being urged to do."