The Most Dysfunctional Place on Earth 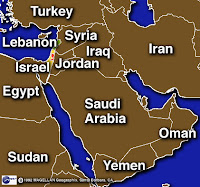 We now live in a nation that will not name its enemy. Homeland Security wants to eliminate terms like Islamic jihad or terrorism from its vocabulary lest we offend some of the people trying to kill us.

The United States has global enemies of every description. Pretending they don’t exist is an invitation to attack. The most potent of our enemies are found in the Middle East, but for many Americans, trying to “make sense” of those who determine policies in the Middle East is impossible; the region is a giant hall of mirrors, a funhouse filled with guns and bombs.

Recently I had occasion to read a 2004 speech given by Haim Harari. It is quite prescient and rings true today. Harari is a theoretical physicist. From 1998 to 2001 he was the president of the Weizmann Institute of Science. Suffice it to say he is an internationally respected Israeli scientist and educator.

While the audience may have expected him to discuss the situation in Israel, he began by noting that the millions who died in the Iran-Iraq war had nothing to do with Israel, nor did Saddam Hussein’s invasion of Kuwait.

Those who died from the genocide in Sudan where Christians are the target are unrelated to Israel. He reminded the audience that Syria’s former dictator, Assad, did not kill tens of thousands of his own citizens in one week in El Hamma because of Israel.

Israel was and is a convenient excuse for the bad intentions of those in the Middle East who, when not continually killing one another, have attacked Israel repeatedly over the course of its existence since 1947. Poised on its borders and funded by Iran are two proxy forces, Hezbollah and Hamas. Barring a nuclear attack on Israel, if they succeed the West is next.

The West has tried to ignore this for a very long time. Bombings in Spain and in England, riots in France, fear throughout the Netherlands are all a portent of worse to come if militant Islam has its way. Even Russia has not been exempt.

Of the Middle East, Harari said, “The root of the trouble is that this entire Muslim region is totally dysfunctional by any standard of the world.”

He noted that “These 22 countries, with all their oil and natural resources, have a combined GDP smaller than that of Netherlands, plus Belgium and equal to half of the GDP of California alone.”

There is no such thing as human rights throughout the Middle East. The social status of women is negated by Islam to that of mere chattel.

Harari took note of the “millions of decent, honest, good people who are either devout Muslims or are not very religious, but grew up in Muslim families…The problem is the vast silent majority of these Muslims are not a part of the terror and of the incitement, but they also do not stand up against it.”

Add to this the ceaseless lies and propaganda to which they are exposed from birth about the world and its events, and it becomes easier to understand why they have little real understanding of the world outside the Middle East.

Harari identified four elements of the Islamic war against the West. The first was the use of suicide murder as an instrument of terror. The second was the endless tide of lies told inside the Middle East and repeated by the Western media. The third element was the money that enables the Muslim militants.

Harari cited the most essential factor as “the total breaking of all laws.”

While the present administration seeks to encumber efforts to find these enemies within our borders, to provide legal assistance to those sworn to kill us, to threaten the interrogators who secured information about future attacks, and to close down the Guantanamo facilities where they are detained, our enemies do not feel bound by any laws, international or domestic.

“The problem is that the civilized world is still having illusions about the role of law in a totally lawless environment.”

Why has the president thwarted delivery of “bunker buster” bombs to Israel? Why is it now U.S. policy to refuse visas for Israeli nuclear scientists seeking to come here to advance their knowledge in physics, chemistry, and nuclear engineering?

That is the quandary in which Israel now finds itself as it wrestles with what action to take against an Iran sworn to annihilate it. It has clearly been abandoned by the present administration and has few real friends among Western governments.

Beyond Israel remains the West itself. Harari warned that we must never surrender to terror. If we continue to find words to obfuscate the threat, we will lose the capacity to address it.

These are 3 "must read" articles by Ben Dror Yemini regarding Israel.

I understand why the vast majority of Muslims are peaceful but silent on the issue of terrorism - The Islamists have the KORAN right - JIHAD is the central axiom of Islam that glues the doctrine together.

However, what I cannot understand is why two thirds of the Jews in this country are supporters of the Democrat Party which under the leadership of Comrade Obama is anti-Semitic and anti-Israel.

Alan, they have named their enemy. All one has to do is read the monograph referred to here,

and come to the same conclusion.

Why Jews vote for liberal candidates is one of life's great mysteries.

But, then, so do blacks. So it is neither religious, nor racial, but a reflection of accepting really bad political philosophies.

"How dreadful are the curses which Mohammedanism lays on its votaries! Besides the fanatical frenzy, ..., there is this fearful fatalistic apathy. ...Improvident habits, slovenly systems of agriculture, sluggish methods of commerce, and insecurity of property exist wherever the followers of the Prophet rule or live.
...
The fact that in Mohammedan law every woman must belong to some man as his absolute property, either as a child, a wife, or a concubine, must delay the final extinction of slavery until the faith of Islam has ceased to be a great power among men.

Individual Moslems may show splendid qualities, but the influence of the religion paralyzes the social development of those who follow it.

No stronger retrograde force exists in the world." -- Winston Churchill on Islam

While some may argue that was written nearly a century ago, they are refuted by the present, which differs little from the past in the most essential way, that Islam is incompatible with modernity.