Mexico: The War Next Door 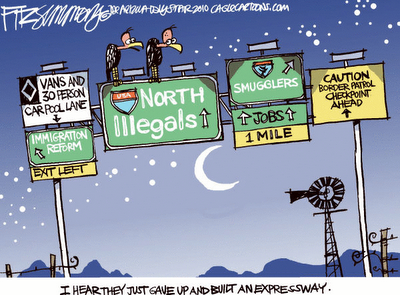 It is amazing how little national coverage there is of the vicious drug wars next door in Mexico that are driving Mexicans across the Texas, Arizona and New Mexico borders to seek asylum under the threat of death for themselves and their families.

It is a war that now includes the murder of U.S. consulate staff and an American rancher. There are other casualties who have already fallen victim to murder and rape about whom the national media make little or no mention.

On April 1, The Washington Times published an excellent and extensive report on the border violence, written by Ben Conery and Jerry Seper. “For more than two years, U.S. intelligence and law enforcement officials have been warning that the dramatic rise in violence along the southwestern border could eventually target U.S. citizens and spread into this country.”

The U.S. shares a 1,951-mile border with Mexico. It is so porous that millions of Mexicans and others from South America and the Caribbean have simply walked across while others are busy exporting drugs into the nation. Estimates of how many illegal aliens reside in the U.S. range between 12 and 20 million.

Why is this a very bad idea? On Sunday, April 4, William Booth of the Washington Post, writing from Ciudad Juarez, Mexico, reported that “A cross-border drug gang born in the prison cells of Texas has evolved into a sophisticated paramilitary killing machine that U.S. and Mexican officials suspect is responsible for thousands of assassinations here, including the recent ambush and slaying of three people linked to the U.S. consulate.”

The gang, Barrio Azteca, “may have been involved in as many as half of the 2,660 killings in the city in the past year. Ciudad Juarez is just across the border from El Paso, Texas. There are other such gangs employed by rival drug lords.

Arizona Governor Jan Brewer has said that the rising violence demonstrates the “abject failure of the U.S. Congress and President Obama to adequately provide public safety along our national border with Mexico.”

It’s not just the border. The Washington Times report noted that in 2009, the Justice Department “identified more than 200 U.S. cities in which Mexican drug cartels ‘maintain drug distribution networks or supply drugs to distributors’—up from 100 three years earlier.”

The Times further reported that the 2010 drug threat assessment by the National Drug Intelligence Center described the cartels as “the single greatest drug trafficking threat to the United States.” Not only established in our cities, it is expanding into more rural and suburban areas.

The immediate question facing the U.S. government is whether to grant asylum to Mexicans streaming across the border. Given the millions of illegal aliens in the nation, this could potentially add hundreds of thousands more.

So the war next door will soon impact America in ways no one really wants to think about, at least at the White House level that is widely believed to see every illegal alien as a potential new Democrat.

This is not a problem that will go away. It is not a problem that is being vigorously addressed by the Obama administration. It will, as in the case of Ciudad Juarez, turn the streets of our cities into killing grounds, far worse than the barely contained mayhem that drugs presently represent.

The war next door has arrived.

I guess the U.S. will have to apologize to all of the millions of other immigrant applicants from all around the world that were denied. And let's not forget the Cubans and Haitians over the last 50 years that may have been deported after arriving on Florida's shore risking their lives in a makeshift raft.

Where is the fairness in granting amnesty and citizenship to Mexicans walking across our border? Won't the rest of those around the world, who would love to come to America, cry foul?

Why not just offer automatic citizenship to anyone in the world that can get here and make it so that the only requirement is that you vote in every election and, of course, vote democrat?

All that's needed to put a helluva crimp in all the violence is to eliminate the government actions which have caused it.

Who but the US Government could by passing a law, raise the value of $20/ton cattle fodder to $500/lb "controlled substance"?

Anybody who tries to tell me that the usage aspect is worse than the violence aspect is gonna find a deaf ear. "Hey, go back and try thinking. You might like it."

I note that the street price of a gram of cocaine is about the same as it was thirty years ago. I wish I could say the same about cars and coffee. Seems to me that this idiotic "War on the Bill of Rights" was lost in, oh, maybe 1973 or so.

"Why not just offer automatic citizenship to anyone in the world that can get here and make it so that the only requirement is that you vote in every election and, of course, vote democrat?..."

Wes, I don't know about you, but it's pretty clear to me that's EXACTLY what they have in mind....

>"Won't the rest of those around the world, who would love to come to America, cry foul?"

I don't believe the Obozo administration cares a rat's a** about fairness or public opinion. he hasn't listened to millions of US citizens crying "foul" about the current healthcare abomination.

We first heard the phrase "War On Drugs" from the lips of Tricky Dick Nixon in 1971. He Must have thought that every President should have a War On something. His predecesor had already started a "War On Poverty", so he had to think of something else.

Come to think of it, that was ANOTHER War On Something that hasn't worked.