2012 Will Be the Tea Party Election Year 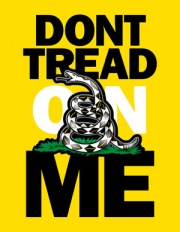 Bluntly said, the full weight of Tea Party members, their family members and co-workers who go to the polls in November will end Obama’s reign of terror.

I think that 2012 will be known as the year the Tea Party movement changed the future of America away from its entrenched socialist drift to a renewal of the founding principles of the nation. The movement is composed, quite simply, of patriots.

That’s why Mark Meckler and Jenny Beth Martin titled their book, “Tea Party Patriots: The Second American Revolution.” I heartily recommend it if you keeping reading and hearing about the movement but are unfamiliar with its origins and its program of reform.

In 2009 neither of the authors had any idea they would be leading a revolution. Martin was a mother of two who was cleaning houses to make ends meet. Meckler was a northern California attorney. They would end up starting one of the largest grassroots organizations in America. You can visit its site at http://www.teapartypatriots.org/.

It began with protests against President Obama’s “stimulus”, signed into law on February 17, 2009. The next day, CNBC’s Rick Santelli angrily called for tea party to protest what we now know was little more than a political slush fund and an a historic failure that did not reduce unemployment or jump-start the economy. It simply added to the trillions in debt Obama would heap upon this and future generations.

When Rush Limbaugh took note of Santelli, he said, “This is the pulse of revolution, starting today!” The Tea Party movement began the next day.

As Meckler and Martin say in their book, “We were angry at politicians from both parties who had abandoned any pretense of responsibility and spent not only all the money we would earn in our lives, but all the money our children and grandchildren would earn in their lives.”

The Tea Party movement could have become a third party, but it didn’t. The combined wisdom of its leaders and members realized that the way to change the government at all levels was to elect people who were in agreement with its core principles of fiscal responsibility, constitutionally limited government, and free markets.

Initially, the Tea Party movement grew from two people to 1.2 million in two months. On April 15, 2009, they turned out for 850 Tea Party events around the nation. Today the authors estimate that 20 million Americans identify themselves as Tea Party patriots. There are more than 3,300 affiliated state and local Tea Party groups. My commentaries, for example, appear on http://www.teapartynation.com/ and I am told on other similar sites.

These people are focused! They understand that the only way to change the government is to change who gets to serve in it. They demonstrated that in November 2010 when the movement returned power in the House of Representatives to the Republican Party. “We’ve seen that the greatest threat to our economic success today comes not from abroad, but from our elected officials. And it is through changing the behavior of those elected officials—and making sure that those whose behavior doesn’t change don’t stay in their jobs—that the Tea Party movement plans to exercise its influence.”

Initially the movement was attacked by the Democrat power structure in 2009 that derided it as “Astroturf” and composed of racists and crazies, but having turned the tide for the Republican Party in 2010, its biggest detractors were the inside-the-beltway GOP establishment who felt threatened.

Writing in The Wall Street Journal on October 22, 2010, Peggy Noonan rebuked them saying, “The tea party saved the Republican Party. In a broad sense, the tea party rescued it from being the fat, unhappy, querulous creature it had become, a party that didn’t remember anymore why it existed, or what its historical purpose was.” She praised the movement for not choosing the third party route.

The movement has been non-partisan, though it has tended to support Republican candidates that it believes reflect its values. It defeated Senator Bob Bennett of Utah in the GOP senate primary on May 8, 2010 and other incumbents have felt the tea party sting for failing to rein in the spending to which they had become accustomed. 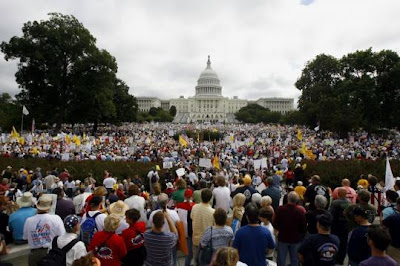 We don’t hear much from the Obama campaign about the Tea Party movement, but its power must surely concern them. On March 16, 2010 more than a million showed up in Washington to protest against the passage of Obamacare and returned in March 2012 to rally for its repeal. Not since the days of the Civil Rights movement and Vietnam War protests has Washington seen such crowds.

There is an army of people in America who have concluded that the enemy is the government and are determined, senator-by-senator, representative-by-representative, to reshape the federal government and to do so at the state and local level as well. It’s already been happening in primaries around the nation as Tea Party candidates challenge and defeat their opponents.

Writing in The Wall Street Journal on October 22, 2012, Peggy Noonan rebuked them saying, “The tea party saved the Republican Party.

Is this date incorrect or is it a prediction of an article not yet written?

You're right. It should read 2010 and has been corrected. Thanks.

Another classic editorial from the master of political science!

I agree that if the Tea Party Surge continues, the big spending/taxers Socialist-Democrats are literally toast as a major political party.

However, I remain very concerned that a massive defeat of the Left at the polls may lead to an insurrection by them in 2013.

Hopefully that won't happen, but if it does the party of liberty will be in control of the most awesome military power on the planet.

The wild card is the economy...and the European dominoes are beginning to fall.

@Ronbo: I don't see any insurrection occurring. After Reagan replaced Carter in 1980, it took eight years for the Dems to find and elect a candidate. And Reagan hurt himself badly with the Iran-Contra project.

The Coalition on Revival/New Apostolic Reformation is Dominionist. A number of the most extreme Tea Partiers in Congress and in State Legislatures are NAR. The COR/NAR plans "to completely capture a majority of seats in the US Congress and in a majority of at least 40 state legislatures in a stated number of years."... "AN INVITATION TO BECOME PART OF THE 24-YEAR PLAN To rebuild American civilization upon the Foundation of the Principles of the Bible." http://65.175.91.69/Reformation_net/Pages/24yearplanbrochure6page.pdf

Journalist Frederick Clarkson has written extensively on the subject of Dominionism. Clarkson stated that the ulterior motive of Dominionism is to eliminate “…labor unions, civil rights laws, and public schools.”... "Their agenda to undermine all government social programs that assist the poor, the sick, and the elderly is ingeniously disguised under false labels that confuse voters." They maintain the necessity of Laissez-faire economics, requiring that people 'look to God and not to government for help.'"... "Despoiling of America: How George W. Bush became the head of the new American Dominionist Church/State." Yurica Report, 2004. http://www.yuricareport.com/Dominionism/TheDespoilingOfAmerica.htm . Also see The Rise of the Religious Right in the Republican Party - Economics from the Religious Right http://www.theocracywatch.org/rr_economics.htm

Mainly it was tea-partyers who took over the House, and while House investigation committees take a long time until the decisions are made . . . and action will take place at the best political time, that a good many high-level persons will declared to be in contempt of Congress. . .and therefore will go directly to prison for a good long time.


I can hardly wait for this to happen.