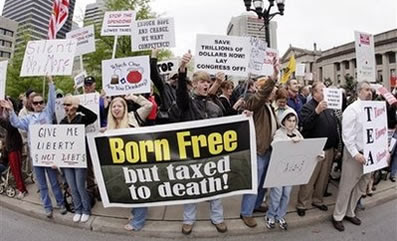 In 1959, during an interview with the late Mike Wallace, Ayn Rand, the author of “Atlas Shrugged”, said “A free market will not break down. All depressions are caused by government interference and the cure that is always offered is more of the same poisons that caused the disaster.”

After the stock market crashed on October 29, 1929, the government’s solution to the crisis was to raise the top tax rate from 25% to 63%. Successively this was increased to 79% and then to 94%, effectively choking off capital formation, investment, and the incentive to start new businesses.

Not until World War Two broke out in Europe in 1939 and threatened the security of the United States and its allies did Franklin D. Roosevelt reverse his failed policies that had stretched out the Depression, turning to private enterprise to build the airplanes, tanks, and guns that would be needed to defeat the Axis powers and, in 1941, the Empire of Japan. Capitalism saved America.

America suffered a little known shock to its economy on September 15, 2008, just a month and a half shy of Election Day, when around 11 AM the Federal Reserve noted a tremendous draw down of money market accounts in the nation to the tune of $550 billion dollars in just over an hour or so. The decision was made to close the accounts. Had they not done that, the Reserve estimated that by 2 PM the entire economy of the nation would have collapsed. Within 24 hours, the world economy would have followed.

The financial crisis this triggered was put off by letting the investment house of Lehman Brothers fail and by getting Congress to agree to a $700 billion program to bail out other investment firms and the insurance firm, AIG. Simply put, without a banking system, you do not have an economy.

Americans are in for another shock to the system on January 1, 2013 when nearly a half trillion in higher taxes will become the law of the land. Taxmageddon would be the largest tax hike in the history of the nation.

The taxes pose such a threat to the anemic “recovery” the economy is said to be having that a think tank called the Committee for a Responsible Federal Budget has been urging the CEOs of corporations and financial institutions to meet with members of Congress to bring pressure to resolve the gridlock that has brought the nation to the precipice of yet another financial crisis.

How bad is the prospect of January 1, 2013? A May 11th Heritage Foundation analysis listed the following:

# the child credit rate is cut in half,

# the marriage penalty roars back to life,

# the death tax is restored to its punitive past,

# a uniquely pernicious additional payroll tax hike from Obamacare takes effect unless the Supreme Court strikes down the law as unconstitutional.

These tax hikes are a combination of expiring tax cuts, particularly the Bush era cuts that President Obama decried, along with newer taxes he advocated. To put it another way, in 2011 Americans had to work 111 days to earn enough money to pay for federal, state and local taxes before they could begin to pay all their other expenses. Unless “Taxmageddon” is repealed, it will take eleven more days in 2012.

The Obama administration ignored the deficit-reduction findings and recommendations of the Simpson-Bowles commission it initiated to address the nation’s financial problems. It imposed Obamacare which will control one sixth of the nation’s economy and which is replete with all kinds of more tax provisions.

Congress put together a “super committee” to address the government’s enormous spending, the threats to the Social Security and Medicare programs, and to recommend tax reforms. It failed and, instead, imposed an across the board “sequestration” program of spending cuts so dangerous to the national security that even Obama’s Secretary of Defense called it catastrophic.

The hope now is that, after the November election, in the interim period before the next President is sworn into office and a new Congress convenes, the increases in taxes can be avoided. That is what the CEOs are belatedly pushing for.

Suffice to say, until power was returned to the Republicans in the House in 2010, a Tea Party movement success, Congress had been on a spending spree and, of course, every measure the House has been forth since then has been spurned by the Democrats, particularly in the Democrat-controlled Senate which has set a record for not producing a budget for the past three years.

Unless voters return power in the Senate to Republicans and defeat President Obama’s reelection, life in America is going to worsen and the nation faces another round of credit rating reductions that will affect its ability to borrow to meet its current debt obligations.

A great nation will have been reduced to pauper status by a profligate Congress whose only “solution” has been to raise the debt ceiling.

I have long blogged that 2012 and 2013 will be "The Gettysburg Moment" once again for our Republic.

This is the decisive battle of what many are already calling The Second American Civil War - a defeat at the polls on the 7th November for the Republican Cause will lead socialism and slavery.

Of course, a electoral victory in November will lead to nothing but blood, toil, sweat and tears in the next few years with the greatest casualties, as a losing side determined to conquer or die generally goes down in flames.

When I visited Israel in 1977, I remarked to a very beautiful young Jewish girl with raven dark hair and blue eyes wearing the uniform of the IDF, who was armed with an M-16 assault rifle that I bet she would be more happy dressed to the nines and on a date.

She said, "But you see, we Jews have only one choice: defend our sacred Israel, or die for all time."

Our equally sacred American Republic has the same choice.

Mish-mash concerning FDR. The first thing FDR did was end the Volstead act, which ended the Prohibition of alcohol. Hoover raised the federal income tax hugely, but proped up businesses with the increased revenue.

Before the "Great Drought", began in 1930, the US exported huge amounts of grain. With the topsoil being blown away with the winds, marginal farm land became worth nothing, and the banking sector fell because the farms they had loaned to with mortages backing the loans, the banking sector went hugely broke.

Not a matter of politics, but one of natural events.

Does no one recall the "Roaring Twenties"? My mother was a "flapper" back then.