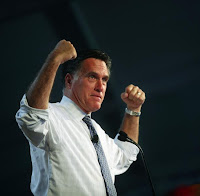 It says a lot about the current state of Democratic Party desperation when James Carville, Clinton’s famed campaign chief, in a recent CNN commentary wrote “You think that Democrats around the country are going to win—as I hear time and time again from people on the street. I ask: What are you smoking? What are you drinking? What are you snorting or just what in hell are you thinking?”

Republicans, too, are worried. It is a common theme among conservatives, the fear that Mitt Romney will commit the same mistake that John McCain did against Obama; the fear that Romney is “too nice.” I say that in a political context, but it is my belief that Romney's school boy smile hides an iron will.

During the debates he defended himself well enough to earn a vote of confidence from the primary voters, but. in retrospect, he had rather weak competition. From Cain to Perry, Pawlenty to Bachmann, Paul to Santorum, and even Newt Gingrich, the candidates swiftly lost support for a variety of reasons that all come down to the perception that they were not electable.

Now, too, among a wide swath of Republicans there is the common complaint that Romney is a “RINO” (Republican in name only) and they point to his tenure as Governor of Massachusetts, but they do so without acknowledging that he got his programs passed with a Democrat-controlled legislature in a very blue state. If he went back and forth on a variety of social issues, I am willing to cut him some slack.

At this writing we do not know who Romney’s vice presidential choice will be, but I can guarantee you that it will not be Sarah Palin, Michelle Bachmann, or Condoleeza Rice. A woman on the ticket has been tried and it was no help at all. Sorry ladies. If anything, Palin demonstrated she had more grit than McCain in the last election.

What I want more than anything else from Romney is a thorough-going attack on President Obama’s failures. He has failed to turn the economy around and I would argue it is as bad as it was when he took office. Romney and everyone else know this. Now he has to hammer this home from now to November 6th.

Mitt put an interesting spin on Clinton’s campaign theme when he said, “It’s the economy and we’re not stupid.” He should repeat that at every campaign stop.

Just as Obama “inherited” the financial crisis of 2008, Romney is going to inherit “Taxageddon” in 2013 if a GOP controlled Congress does not repeal significant increases in taxes, all of which will stall any effort to get the economy back on a growth track.

Obama’s war on energy in America is another area that Romney has to focus upon, reminding voters of the way he has openly attacked the coal mining industry, done everything he can to shut down oil drilling anywhere on federal land and offshore, his EPA is attacking “fracking”, a technique to access natural gas, and, of course, wasted billions on “green” energy fantasies.

The Fast and Furious scandal in which Obama administration officials as high up as Attorney General Eric Holder and Homeland Security Secretary Janet Napolitano are complicit should be explored, although it appears that Congress is reluctant to aggressively address it and the administration is just hoping to run out the clock in the hope of being reelected.

I would like to see Romney promise to rebuild America’s military. Overall, it lacks manpower and is working with geriatric equipment to fight a major war. As Ronald Reagan said, “Nobody ever attacked us because we were too strong.” In a dangerous world, a world class military is vital to the security of the nation and our allies.

In the end, the campaign will come down to Obama’s personality and I believe his “likeability” is not going to help him very much this time around. When he opened his campaign on an Ohio college campus, he did so to a half-empty hall where members of the audience were encouraged to leave their seats and stand in front of the podium to give the impression of a larger gathering.

Obama’s pitch to the youth is going to fall on deaf ears when so many will graduate from college with massive debt and cannot find jobs. Hope is a grand thing, but the real changes during his time in office have been for the worse among the entire swath of working Americans, many of whom have given up looking for a job. Let’s hope they vote for someone who knows how to create an economy that will produce jobs.

Just as many Democrats voted for Reagan in similar economic times in 1980, that is a real prospect in 2012. I think a lot of Americans--Democrats included--understand that four more years of Obama would be devastating to America’s future.

I wish I were a fly on the wall when Carville got the news that Obama has come out for gay marriage. If there is any better example of Obama’s lack of connection with vast numbers of voters, Republican and Democrat, this issue displays it. There are limits to what Americans will tolerate and more than thirty states—and now add North Carolina to the list—have passed resolutions and laws banning gay marriage.

It is my belief that Obama is extraordinarily vulnerable to defeat, but that has given rise to another commonly expressed Republican fear; that the Democrats will steal the election with ACORN-style tactics at the polls.

In the end, “Are you better off in 2012 than you were four years ago?” will end Obama’s first and last term.

If the present Tea Party Republican electoral march on Washington, D.C. continues in this presidential year, the only way Obama stays in office is by pulling off a military coup...which would be highly unlikely to say the least.

Unlikely, yes, but given this president's disdain for those who don't agree with him, and the Constitution, I wouldn't put anything past him. I just read somewhere that Dept of Homeland Security is stocking up on ammo and other military supplies. Why on earth do they foresee a need to spend $ on that?

Also I believe I read in a credible news source that legal gun sales to citizens this past Christmas broke records. People are clearly worried about what this man is capable of and where he's taking this country.