Is Fast and Furious the Next Watergate? 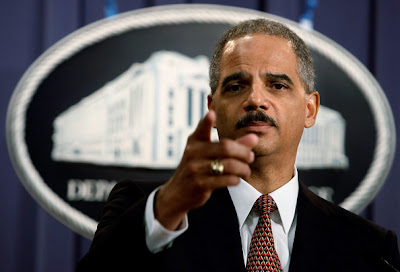 When suspects in a crime are interrogated, they often develop memory loss. When the crime is running guns to drug cartels on both sides of the border, the crime involves the murder of a U.S. Border Patrol officer, Brian Terry, Immigration and Customs Enforcement agent, Jaime Zapata, and countless Mexican citizens.

Katie Pavlich has written an extraordinary expose, “Fast and Furious: Barack Obama’s Bloodiest Scandal and its Shameless Cover-Up” (Regnery Publishing). Pavlich, a reporter with extensive contacts within the Bureau of Alcohol, Tobacco, Firearms, and Explosives (ATF)  has meticulously documented a story  that should result in contempt of Congress action against Attorney General Eric Holder and possibly Secretary of the Department of Homeland Security, Janet Napolitano as well.

It is an appalling story of arrogance, stupidity, and the intimidation of ATF agents who dared to question and expose the operation. It is a story of deception at the highest levels of our government. Both Holder and Napolitano exhibited memory lapses before a congressional committee. Both knew about a federal government authorized gun-running operation to Mexico called “Fast and Furious.”

Pavlich reports that “Fast and Furious was closely followed by Department of Justice officials. On multiple occasions, U.S. Attorney Dennis Burke met with Phoenix ATF Director Bill Newell to discuss the progress of the Fast and Furious operation. ‘There were DOJ attorneys and prosecutors who were involved in this since the beginning, giving advice,” testified ATF Special Agent Peter Forcelli.

As Pavlich details it, “Operation Fast and Furious wasn’t a ‘botched’ program. It was a calculated and lethal decision to purposely place thousands of guns in the hands of ruthless criminals.”

The operation was designed to attack the Second Amendment right of Americans to purchase and bear arms, a right considered so essential to the nation that it followed directly after the First Amendment rights of free speech, freedom of the press, the prohibition of the establishment of a nationally sanctioned religion, and the right of Americans to peaceably assemble, and to petition the government for a redress of grievances.

The facts regarding Holder’s and Napolitano’s testimony are clear:

“Eric Holder was sent five memos, personally addressed to him, in the summer of 2010 that detailed Operation Fast and Furious.” Holder claimed he first knew about the program in February 2011.

“Homeland Security Secretary Janet Napolitano has feigned ignorance when questioned about Fast and Furious. She claims she only found out about the program after Brian Terry was murdered.”

“She visited the White House with Eric Holder to visit President Obama just a day before Holder testified on Capitol Hill about Fast and Furious, leaving the reason for her visit blank.”

Pavlich writes, “These are the facts: There are still 1,400 Fast and Furious guns missing and ATF agents are not actively trying to track them down. Ten thousand round of ammunition were sold to cartel-linked straw buyers under the watch of the ATF. Eight hundred of the original 2,500 weapons sold through Fast and Furious have already been linked to criminal activity.”

The program, observers believer, was the deliberate effort to blame the violence in Mexico and in some cases in America on the gun shops, but those shops were intimidated into participating in Fast and Furious out of fear that ATF would take away their licenses.

After questioning ATF and Justice Department witnesses, Sen. Charles Grassley (Iowa, R), the top Republican on the Senate Judiciary Committee, wrote a January 31 letter to ATF officials saying, “As you may be aware, obstructing a Congressional investigation is a crime. Additionally, denying or interfering with employee’s rights to furnish information to Congress is also against the law.”

On May 3rd Rep. Darrell Issa, (CA) Chairman of the House Oversight and Government Reform Committee, sent every member of his committee a 64-page draft contempt order against AG Holder, along with a 17-page memo outlining the history of the scandal. Only one attorney general has been found in contempt, Janet Reno in 1998.

Fast and Furious is redolent with memories of the Watergate coverup.

On March 23, 2011, in a Univison interview, Obama said, “First of all, I did not authorize it” and when further pressed said, “Eric Holder did not authorize it. He’s been very clear that our policy is to catch gunrunners and put them in jail.” The facts strongly suggest otherwise insofar as Fast and Furious literally authorized a gunrunning program under the aegis of ATF.

As Pavlich noted, “Many people in ATF saw what was happening and tried to warn the bureau, but the new corrupt and arrogant culture of management had become too powerful and intimidating. Field agents who spoke up were punished for having an opinion and daring to voice it. Whistleblowers had their reputation, careers, and finances shattered.”

This culture of corruption is endemic to the Obama administration and as more and more examples become known it has been in full panic mode to suppress the truth. No matter what the outcome of the testimony of two of its top appointees, the only way to save America is to vote out President Obama in November and ensure that Mitt Romney has a Republican Congress.

I agree this is an excellent summary of the basic, shameful facts. But I think the country is now too divided ideologically for there to BE another Watergate. Too much of the electorate no longer has a trustworthy moral sense. I am flabbergasted by the thought processes in the Obama administration that created "Fast and Furious", but I am not surprised--I knew Obama and his political handlers were this corrupt when he was able to brush off Rev. Wright, in 2008, with words to the effect of, "In 20 years of going to his church, I never knew he preached such things." Where others see our political condition as a game, in which the "other side" just happens to be up at bat, I see the system as fundamentally broken, or at least dangerously strained, to the point of lasting damage.

The old axiom that says "the cover-up is worst than the crime" is aprapo here. Those who were involved with the decision making and then the attempts to cover up should be "rolled up" and thrown into the deepest darkest cell to await a trial of their peers. Those involved should be held complicit in the murder of the Border Control agent as well as anyone else who is affected by the actions of this scheme.

Fast and Furious is nothing less than a debacle, one that should have been the death knell for the entire Obama regime.

Sadly, we have the most incredibly useless Congress in American history, and as hard as Issa tries, I believe he is being subverted by John *cry me a river* Boehner...

Until the House and Senate are in order, the White House and DoJ can, and WILL run as wild as they wish to!