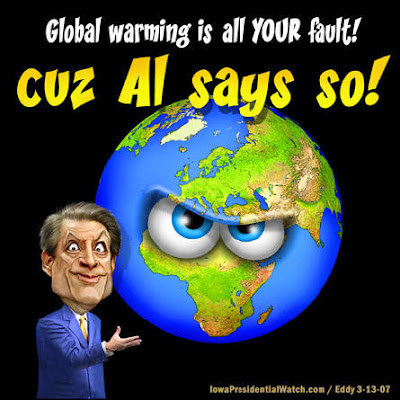 What is it with the “warmists”, Al Gore and his clones who keep insisting the Earth is warming, that too much carbon dioxide (CO2) will be the death of us, and that we have to immediately stop burning “fossil fuels” if we are to save the planet? They are the most relentless liars on the face of the planet.

They want us to cover the surface of the U.S. with solar panels and the mountains with wind turbines to generate the energy needed for everything we do. These Green energy alternatives are so wonderful they are producing a mere three percent of our current needs, require government subsidies and loan guarantees to exist, and tend not to be all that great when the sun isn’t shining and the wind isn’t blowing.

So why are we still hearing from this discredited and disgraced bunch of charlatans and buffoons? In early May, The New York Times published “Game Over for the Climate” by a major offender of the truth, Dr. James Hansen, who for some reason is still the director of the NASA Goddard Institute for Space Studies (GISS), despite having pocketed big bucks beyond his humble government salary. In 2007 he split a million dollar Dan Davis Prize with someone else and in 2001, received a $250,000 Heinz Award. Former GISS employees want him fired.

As debased as The Times is, in 2006 the American Association for the Advancement of Science selected Hansen to receive their Award for Scientific Freedom and Responsibility. I cite this as a warning that even a Pulitzer Prize winning newspaper and formerly respected science organization have long since gone over to the dark side when it comes to global warming. Nothing they have to say on the subject should be regarded as more than pure propaganda.

Suffice to say that Dr. Hansen’s opinion article cited every global warming lie we have been hearing since 1988 when he first gained famed testifying before a congressional committee that we were doomed. In his Times article, he predicted that the “semi-permanent drought” would turn the Midwest into “a dust bowl.” Like every other global warming prediction (that hasn’t come true) this will happen “over the next several decades.” Time enough for Dr. Hansen to pick up a few more awards and fatten his bank account.

The face of the global warming hoax, Al Gore, will not shut up. He made news in August 2011 when he totally lost it while speaking at the Aspen Institute. Anyone, noted climatologists, meteorologists, and mere science writers like myself were the target of his rant for actually citing things such as the fact that the Earth has been in a natural COOLING cycle since 1998 and other inconvenient facts about the climate.

“And some of the exact same people” said Gore, frothing at the mouth, “I can go down a list of their names—are involved in this. And so what do they do? They pay pseudo-scientists to pretend to be scientists to put out the message. ‘This climate thing, it’s nonsense. Man-made CO2 doesn’t trap heat. It may be volcanoes’ Bullshit! ‘It may be sun spots.’ Bullshit! ‘It’s not getting warmer.’ Bullshit!”

The climate is not cooperating. The Church of Global Warming is crumbling around them. People are making fun of them. Parents are objecting to their scaring children with their lies. People actually want to warm their homes in winter and cool them in the summer. Meanwhile, using the global warming lies, the Environmental Protection Agency is trying to shut down the entire U.S. coal mining industry and attacking “fracking” to access natural gas. The Department of the Interior has virtually shut down all oil drilling on federal land and offshore. How crazed is all this?

One of their number, Dr. Peter Gleick, formerly of the American Geophysical Union’s Task Force on Scientific Ethics—the irony is too delicious—perpetrated a fraud against The Heartland Institute earlier this year, pretending to be a member of its board in order to secure a list of its donors and allegedly authoring a memo about a scheme to invade the nation’s schoolrooms with a program to dispute global warming. After confessing to the former, he resigned from the task force. An FBI probe is underway to determine if he broke any laws. Heartland has dubbed it “Fakegate.”

The Institute, by the way, is sponsoring its 7th annual conference on climate change, May 21-23, in Chicago, immediately following the NATO conference that will be held in the windy city where it is headquartered. Its theme this year is “Real Science, Real Choices.” Among the speakers will be Czech President Vaclav Klaus, Rep. James Sensenbrenner, vice chairman of the House Committee on Science, Space and Technology, and two former NASA astronauts.

The lesson we can draw from the last few decades is that the entire environmental movement, of which the global warming hoax is one part, is an extension of what Dr. Robert Zubin, a Senior Fellow with the Center for Security Policy, addressed in his new book, “Merchants of Despair: Radical Environmentalism, Criminal Pseudo-Scientists, and the Fatal Cult of Antihumanism.”

Antihumanism has been around a long time. As Dr. Zubin points out, it has taken the form of “Darwinism, eugenics, German militarism, Nazism, xenophobia, the population control movement, environmentalism, technophobia, and most recently, the incredibly demented climatophobic movement, which seeks to justify mass human sacrifice for the purpose of weather control.”

Al Gore, James Hansen, and even President Obama’s science advisor, John Holdren, are card-carrying members of this cult. In 1971 Holdren co-authored “Global Ecology” with Paul Ehrlich, famed for his 1968 book, “The Population Bomb.” They wrote “when a population of organisms grows in a finite environment, sooner or later, it will encounter a resource limit. This phenomenon, described by ecologists as reaching the ‘carrying capacity’ of the environment, applies to bacteria on a culture dish, to fruit flies in a jar of agar, and to buffalo on a prairie. It must also apply to man on this finite planet.”

So you need to understand that you are no better than a fruit fly and you need to die in order to avoid depleting the planet’s supply of food and its energy resources.

God knows I would like to ignore or—better still—never have to hear from these climate Nazis, but that is not going to happen so long as The New York Times, the United Nations, and a host of others keep repeating their lethal lies.

Thank you. It's a message that needs to be hammered home until we are rid of these charlatans.

Alan - great writing! And all true.

This article focuses upon the political abuse of the "global warming" issue, but it doesn't go far enough to get to the heart of the matter, which is glimpsed whenever the article touches upon the science or the scientists like Hansen who promulgate the alarmist scientific consensus, at which point, Alan, you basically throw up your hands and ask "why is this still going on"?.

The answer, of course, is because the science itself is incompetent, and all of the climate "experts" are deluded (and all of our institutions, like the AAAS you mentioned, thoroughly suborned by the incompetent consensus), after having been miseducated to false theories (i.e., the "greenhouse effect", and a radiative transfer theory that has been misapplied so that the true physics of the atmosphere has been literally turned upside down and causally reversed) for two generations--about 40 years, since Carl Sagan (a false scientific idol) was worshipped by a generation of science students, and he turned Hansen on to the dramatic fantasy of a "runaway greenhouse effect" as a plausible scientific idea (which it was and is not).

It is such an entrenched insanity because it is an entrenched dogma, taught as unquestionable scientific fact to two generations of students, who have become false "experts". And it is just the tip of the iceberg of incompetence in modern science, across the physical sciences today. Political abuse of the incompetent science is just the inevitable progression of the disease.

The Powers That Be want these United States to fail as are the European states. These powerful people, addicted to the occult practices of eugenics and worse, see their plans working in the failure of the European Union and the foundering of currencies around the world.They will grow bolder.