It's the Government, Stupid 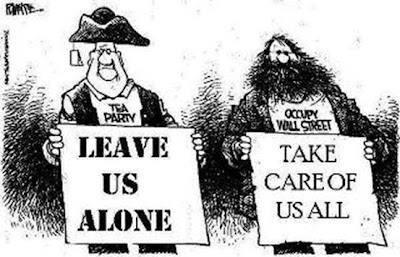 The political pundits all agree that the November elections will be all about the economy. I suspect that most Americans draw their conclusions about the economy from empirical observations such as whether they or someone they know is out of work, whether shops in their communities are closing, and the price of gasoline at the pump.

While the economy is covered by the business media, newspapers, magazines, and cable channels, it tends to get short-shrift in the mainstream media because there well may be a shortage of reporters who actually understand economic trends beyond the very obvious.

For the record, I am not an economist and did not inherit the arithmetic gene from my late father, a CPA. Instead I have made my way with whatever skills I have as a writer. Suffice to say, I am still working to pay the rent. My interest in the economy is personal.

It’s personal for those without a job. A May 3 report by CNN Money, “The 86 Million Invisible Unemployed” said, “There are far more jobless people in America than you might think.” This is a good reason why you should ignore the government statistical reports on unemployment. They are rigged.

As the CNN report noted, “While it’s true that the unemployment rate is falling, that doesn’t include the millions of non-working adults who aren’t even looking for a job anymore. And hiring isn’t strong enough to keep up with population growth.”

“A person is counted as part of the labor force if they have a job or have looked for one in the last four weeks. Only about 64% of Americans over the age of 16 currently fall into that category, according to the Labor Department. That’s the lowest labor force participation rate since 1984.”
﻿
﻿ An April 28 Wall Street Journal editorial, “The Growth Deficit”, took note of the fact that “The weakest recovery on record continued in 2012’s first quarter, with the Commerce Department’s Friday report of 2.2% growth.” Despite the official government view that the recession officially ended in 2009, the “quarterly growth has average 2.4%, That’s slower growth than in every modern expansion, and about half the growth rate of all recoveries since World War Two, according to Congress’s Joint Economic Committee.”

A recent poll commissioned by Generation Opportunity, a non-profit think tank that concerns itself with young Americans, found that “just 31% of 18-29-year-olds approve of Obama’s handling of youth unemployment while 69% say the current leadership in Washington fails to reflect the interests of the younger generation.” That is very bad news for Obama and, if they vote, very good news for Romney.

The current issue of Business Week has an article, “The Stuck-in-the-Middle Recovery” asks “What if the economy comes back but leaves millions of middle-class Americans behind?” noting that “Ninety-five percent (95%) of the net job losses during the recession were in middle-skill occupations such as office workers, bank tellers, and machine operators, according to research by economists Nir Jaimovich of Duke University and Henry Siu of the University of British Columbia.”

Calling it the Great Recession to differentiate it from the 1930’s Great Depression, Business Week reported that “employers aren’t about to go back to their larger, less efficient workforces. Even with 5.2 million fewer Americans employed than in January 2008, the U.S. is turning out more goods and services than before the recession, one reason corporate profits have hit record levels.” All the wonderful technology that has put iphones and other gadgets in our hands has also eliminated millions of jobs.

For three-and-a-half years Americans have listened to President Obama blame the economy on George W. Bush and that excuse is not working anymore.

A few statistics tell the real story. Since his inauguration in 2009, the average retail price of a gallon of gas has gone from $1.83 to $3.44, an increase of 84%! That’s what happens when the government virtually shuts down all exploration and extraction of oil on federal land.

Suffice to say the full list of wasted dollars is staggering.

Perhaps the worst outtake from these statistics and facts is the way President Obama continues to hold onto the belief that government spending—the failed stimulus, “investments” in renewable energy, et cetera—is the way to turn the economy around.

Waiting for all Americans in 2013 is the advent of “Taxamageddon”, a combined 34 percent (34%) increase in taxes resulting from the expiration of existing tax policies and the imposition of new ones.

In 2009, Obama said of his plans to turn around the economy, “If I don’t have this done in three years, then there’s going to be a one-term proposition.” It’s up to the voters to make that come true.

While I commend you for including some numbers in your analysis for once, they are wildly out of context. To pick one example, you speak of the price of gas. But if you actually looked at a relevant graph, you'd see that gas has simply returned to where it was pre-recession. Yes, it happened to be very cheap at the instant Obama took office - because commodity prices plunged in the recession! Whereas oil-rig licenses are at record HIGHS, and oil production is at a ten-year high! Your response is almost completely out of touch with reality.

It should be clear from a look at how Europe is doing that the route you suggest - austerity - is not the way to go. Compare the recovery of America, with its weak stimulus and weak recovery, with China's strong stimulus and strong recovery, or with the U.K. or France's austerity and the resulting double-dip recession!

Out of touch with the facts, Caruba.

@Alexander. Thank you, but this blog has a strict policy against posting the comments of pompous asses. Therefore, nothing you have to say in the future will be posted here.

Let me put it in a way you might understand. GO AWAY.

What does the sky look like on your world? Eurabia is on the edge of disaster (Nazis WIN in Greece?), China as ghost cities and 330 MILLION unemployed, and oil is NOT being produced nor is coal, because the EPA-nazis are shutting it all down, on Cass Sunstein's orders.

How you liberals live from day to day amazes me.

A certain person should stop and take a look at gasoline prices over the past 10 years. In 2004, the price of gasoline was about $1.00, and diesel fuel less than that.

This has nothing to do with a recession . . . just the idiotic government (especially EPA) position not allowing drilling for oil on federal lands.

Too, both CA and FL won't allow off shore drilling because it would disrupt their view of the ocean. Even though oil leaks are large because of natural pressure.