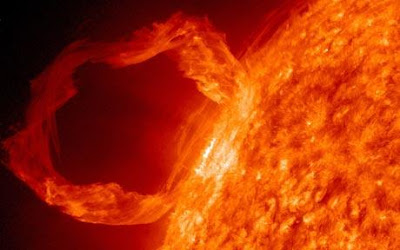 On May 20, Sunday, much of the United States was treated to an annular solar eclipse when the Moon gets directly between the Earth and the Sun. There is another interaction with the sun, however, that holds the potential for tremendous harm and solar scientists are warning we could be in for one as a cycle of such flares is peaking.

The Sun gives off solar flares all the time, but they rarely are noticed or impact the Earth because our atmosphere serves as a kind of cocoon—the magnetosphere—that deflects these bursts of electromagnetic energy.

A large flare is ten times the amount of energy released by a volcanic eruption, something along the lines of millions of 100-megaton hydrogen bombs exploding at the same time, but is less than one-tenth of the total energy emitted by the Sun every second.

As Robert W. Felix, author of “Not by Fire, but by Ice”, says, “Our magnetic field is one of the best described and least understood wonders of the universe.” What is known is that the Earth has been through a series of magnetic reversals and they line up with mass extinctions of life. What is known is that interglacial periods are about 11,500 years long and we are at the end of such a period. Felix has been warning that the Earth is on the cusp of a new Ice Age.

Everything on earth, its plant and animal life, is directly affected by the Sun and we are most aware of it with the passing of the seasons from warm summers to cold winters. The rest of the time we just check the weather report to learn whether it is going to be a rainy or sunny day.

The Sun has been in a minimum cycle of activity, measured by the number of sunspots (magnetic storms) as it cycles in and out of minimum to maximum activity approximately every eleven years. Thus, in 1998 the Earth entered a cooling cycle despite all the apocalyptic claims of global warming. The last mini-ice age lasted from 1350 to 1850 affecting Europe and North America..

For the record, carbon dioxide has nothing whatever to do with warming the Earth. Any rise or fall of CO2 shows up after a change in the Earth’s climate. You have been lied to by the United Nations Environmental Program and every charlatan making such claims.

The last recorded major flare that got everyone’s attention was in 1859, noticed by telegraph operators who reported sparks flying out of their machines and by the vast auroras seen by many. It’s called the Carrington Event, named for a British astronomer, Richard Carrington, who is credited as being the first to realize the link between the Sun’s activities and geomagnetic disturbances on Earth.

A similar solar storm this time around could be truly apocalyptic. It could affect part of the nation’s electrical grid. It is expected sometime this year or next when the Sun will hit a peak eruption period.

The most recent disruption was in March 1989 when it knocked out five major electricity transmission lines in Quebec and, two minutes later, the entire Canadian province was in darkness. It damaged electrical equipment as far south as New Jersey and people in Texas and Florida witnessed displays of the aurora borealis, normally something seen only in the northern climes of the Earth.

If the Earth is hit with a major flare for some there will be no weather reports to check. There will be no lights, television, cell phones or computers to turn on because there will be no electricity. The most optimistic prediction is blackouts in some areas, but it is believed that they would last only hours or days. Companies involved in the transmission of electricity are scrambling to figure out how large the impact could be.

Replacing damaged transformers would not be easy. They weigh hundreds of tons each and they aren’t sitting around in warehouses to be hauled out and hooked up.

As if the affect on the transmission system wouldn’t be bad enough, a major solar storm would also play havoc with global positioning systems (GPS) that are in cell phones, airplanes, and automobiles. It would likely have an adverse affect on all the commercial satellites circling the Earth.

It doesn’t take a Jules Verne to imagine what life without electricity would be like even for a few days or weeks. Credit cards would be useless, no gasoline pumps would function, the communications we take for granted would be unavailable, and, in general, normal life would grind to a halt.

If you think your electrical bill is high keep in mind that the Environmental Protection Agency is trying to put the coal industry out of business and that means some fifty percent of all the electricity generated with cheap, abundant coal would cease to be an energy source. Everywhere that people have been forced to pay for solar and wind power they have seen their bill skyrocket.

The oil every modern society depends upon to function is suffering a similar fate in America, currently importing sixty percent of its oil despite sitting atop enough oil to render us independent of all other suppliers. In addition to gasoline and diesel, oil is a component of thousands of other products and uses, not the least of which is everything plastic.

Ancient civilizations used to worship the Sun. If and when it sends a major solar storm our way, we will all be praying that the lights go on again.

The Kingston Trio got it right years ago:

They're rioting in Africa. They're starving in Spain. There's hurricanes in Florida, and Texas needs rain.

The whole world is festering with unhappy souls. The French hate the Germans, the Germans hate the Poles.

Italians hate Yugoslavs, South Africans hate the Dutch. And I don't like anybody very much!

But we can be tranquil and thankful and proud, for man's been endowed with a mushroom-shaped cloud.

And we know for certain that some lovely day, someone will set the spark off... and we will all be blown away.

They're rioting in Africa. There's strife in Iran. What nature doesn't do to us... will be done by our fellow man.

In fact, solar science today is just as bad as climate science, its models just as bad about foretelling the immediate future, much less the long-term possibility of "apocalyptic events", as are the climate models. The crisis in science is a fundamental, general one.

And we's miss our daily dose of Warning Signs too...

The future can not be foretold, especially not by extrapolating from the relativly recent past into the future.

@TexasFred: I ain't a'scared of a bunch of neutrons, protons, and little squigly particles. (Much)

@LarryOldtimer: Yes, but history does tend to repeat itself and this holds true for climate cycles. I may be off a decade or two, but what's that between friends?