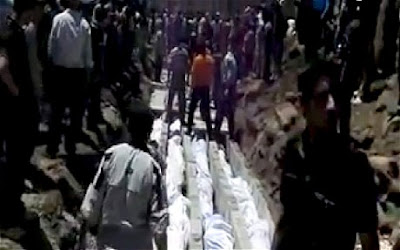 One need only compare the statements of diplomats and world leaders against the reality of what is occurring on the ground in Syria. Its dictator, Basher al-Assad, the son of the former dictator, has been killing thousands of Syrians since the insurrection began on May 15, 2011.

Similar to the protests against the Mubarack regime in Egypt, the initial spark was a Facebook campaign to rally protesters in what has since been called the Arab Spring. The Egyptian military did not attack those gathered in Cairo’s Tahrir Square, but the Syrian military, loyal to Assad, has been ruthless in their efforts to keep him in power.

A recent attack on Houla, a group of villages northwest of the Syrian city of Homs, killed ninety people with a deliberate emphasis on killing children in the villages; reportedly 32 were among the dead.

Consider now the response of United Nations officials and spokespersons for nations looking on. The UN’s Kofi Annan called it a “flagrant violation of international law” while the head of the UN mission of military observers in Syria called the killing “indiscriminate and unforgivable.” The UN Secretary-General, Ban Ki-moon, said, “The government of Syria (must) immediately cease the use of heavy weapons in population centers.”

The uselessness of the United Nations can be found in these statements that substitute words for action.

Britain’s foreign secretary, William Hague, called it an “appalling crime” and Secretary of State, Hillary Clinton, said “The United States will work with the international community to intensify our pressure on Assad and his cronies, whose rule by murder and fear must come to an end.”

Middle East observers advise that matters be allowed to run their course, predicting that Arab nations may intervene to remove Assad.

Supported by his minority clan, the Alawites, Hafez al-Assad seized control of Syria in 1970 and held it for three decades until his death 2000. Power was immediately transferred to Bashar. Neither father, nor son, is about to relinquish power, let alone pay any attention to the UN or Western nations.

Assad 2.0 is the quintessential Arab dictator. Until the U.S. intervened in 2003, Saddam Hussein had been the poster boy for brutality killing Iraqi Kurds and anyone else that opposed him.

The U.S. had no problem with Saddam’s eight-year war with Iran because Iran had been the declared enemy of the U.S. since 1979. Invading Kuwait was a serious miscalculation by Saddam for a host of oil-related reasons. A U.S.-led force drove him back across the border in 1991 and, in 2003, returned to depose him.

Assad has some powerful friends, not the least of which is Iran. As former UN Ambassador, John Bolton, pointed out in a recent commentary, “Tehran has long treated Syria as a satellite, part of its regional arc of influence that includes terrorist Hezbollah, now politically and militarily dominant in Lebanon. It is prepared to shed considerable Syrian blood to save Assad.”

Assad has other international friends, China and Russia, who have been backing Iran for a long time, allowing its nuclear program to go forward. Perhaps, in a region where Israel, Pakistan, and India have nuclear weapons, they see it as some kind of balance of power thing.

Ambassador Bolton was sharply critical of President Obama’s reluctance to directly confront Syria, attributing it to the futility and failure of his diplomatic efforts to stop Iran’s nuclear program via UN sanctions.

Obama has no intention of sending U.S. troops to end the Assad regime as Bush43 did to Saddam in Iraq. Realistically, Americans do not want to engage in yet another Middle East war. NATO was used to shield U.S. involvement during the short Libyan uprising that drove Gadhafi from power. Both U.S. and NATO forces have been exiting Afghanistan and Iraq.

All bets are off if Israel decides to attack Iran’s nuclear facilities. As recently as Sunday, May 27, Secretary of Defense Leon Panetta indirectly confirmed recent remarks by the Ambassador to Israel, saying that the U.S. is “ready from a military perspective’’ to stop Iran from making a nuclear weapon if international pressure fails.

Every forty years or so, Arabs trade one dictator for another. I suspect that Assad like his father will survive despite all the expressions of outrage from the UN and others.

One need only cast an eye on Egypt’s recent election to see how futile it is to expect any real change in the Middle East. The Egyptians will either end up with the Muslim Brotherhood imposing the horrid Sharia law or with Mubarack’s former prime minister, a military ruler.

We have to get passed the notion that elections in the Middle East mean the same thing as in the West. They are a charade. The grip of Islam and the ancient animosities between Muslims dictates their outcome.

Beyond elections is the brute force that Arabs apply to each other because they are not real nations, but rather places where brutal, coercive regimes impose order on violent, hostile tribes and religious communities, Shiite and Sunni, that would otherwise kill one another when not attacking the remnants of Christians who live among them.

Syria’s cities and streets will run red with blood until the insurrection is put down. Nobody, not the UN, not neighboring states, not the West will come to the rescue of its people.

It certainly is a terrible series of atrocities. Are you advocating military intervention by the US or UN? What is your actual stance on the issue?

I have to guess that few have ever read the North Atlantic Treaty.

The US has to stop trying to police the world. We have nothing to gain by interferring with what happens in the Mideast.

Time to exit NATO, and exit the UN.

We have more than enough problems to solve here in the US of A.

@Alexander. I would prefer that the US stay out unless all other options are exhausted.

@Larry. Yes, let us get out of the UN, but I think that NATO should be retained.

America needs to sit this one out - let them sort out their own problems. It's about time the rest of the world picks up the slack, if they want to. That way America can't be blamed when this all goes South.

@Lime Lite. I agree. We have given millions of Middle Eastern Muslims lots of reasons to hate America and Americans. A lot of them danced in the street on 9/11. Time to let them kill each other for awhile.

NOT ONE DROP OF AMERICAN BLOOD!

Not one... It's Syria, it's one Muslim sect killing another Muslim sect, sounds like a WIN-WIN to me...

while MSM makes this out to be a 'problem' of the population staging a so called democratic uprising against what seems to be a brutal leader, this is actually an internal Moslem thing, and how I dislike referring to it in this manner.

Assad is from the Alawites a branch of the Shi'ite, and this trouble is mainly with the other major branch of Islam, the Sunni, who are attempting to seize control.

So Assad is trying to stop those Sunni who are attacking the Alawites/Shi'ites, and vice vera, so blame can be effectively sheeted home to one side or the other, according to which side is spreading the story.

The same happened in Iraq as you said when Hussein cracked down on the opposing Islamic faction.

It happened in Lebanon, and then in those Countries across North Africa Libya amongst them, an internal Moslem factional war for power.

As has happened now in Egypt, the runoff is between an ex Mubarak supporter and the man from the Moslem Brotherhood, which is in fact a branch of the Sunni faction.

It's the same as the power struggle between Hamas (Sunni) and Hezbollah (Shi'ite, or Shi'a, same thing)

Beware of thinking of all this as a 'Democratic' people's uprising against their leaders. This is purely Moslem infighting for supremacy.

What works in their favour, either side is if NATO or the US get involved, and then both sides can blame them instead.

This has nothing whatsoever to do with Democracy.

The purpose of the North Atlantic Treaty was first, prevent another European war, and second, to produce a united front to keep the USSR from invading.

There is no USSR any more, and we, the US of A have not the money to continue to fund the defense of
Europe.

Serbia never threatened, let alone attack a NATO nation, so it was anti-NATO to attack Serbia. NATO has no charter to attack nations in the Mideast.

NATO is long ago useless for its purpose, and has become a rogue military.

Sorry. Alan, but in this case, you are entirely in the wrong.

The US has a population of but about 306 million contending with more than 6 billion in other nations, and we now are having great financial problems.

Long since time to cut our losses. Every time NATO as attacked a Mideast nation, the results have been disasterous for the US of A.

It was so painful to read that article because it's so true.