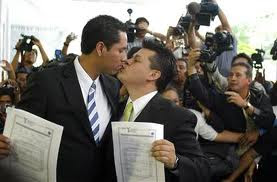 Let the chatteratti and political pundits say what they will, dancing around the issue of gay marriage on Obama’s chances of reelection, but I will tell you plainly that he has swallowed a poison pill.

Gay marriage is a deal-breaker for a vast swath of American voters that includes Catholics as well as the black and Hispanic communities. Urbanites and suburbanites may say that they are okay with gay marriage, but what they tell pollsters and what they say privately among friends and family is far different. Americans may want to be tolerant, but their distaste for the gay lifestyle and incessant demands for acceptance is deeply offensive to most people.

Thanks to what will be seen as a historic gaffe by Vice President Joe Biden, the President was put in a vice as he was seen to vacillate—evolve—his position regarding gay marriage, but elections often turn on such issues. Yes, the economy will be the dominant issue of the 2012 election, but the President found himself in a position where he could not avoid taking a position. It was diametrically different from the one he expressed in the 2008 campaign.

If, as anticipated, pro-gay-marriage activists get a plank in the Democratic Party platform affirming their stance, that will further lock the party into an uncompromising position on the issue. Ironically, they will hold their convention in North Carolina, a state that just made headlines by resoundingly rejecting gay marriage.

For the record, I have little faith in the polls that seem to suggest that gay marriage is gaining wider acceptance. People who do not feel comfortable being labeled “homophobes” and bigots tend to tell pollsters they are okay with gay marriage even if they are not.

Incensed by Obamacare, the issue that ignited the creation of the Tea Party movement, by the failed stimulus, by scandals involving “green energy” companies that cost Americans millions, by Fast and Furious, an Obama administration sponsored gun-running operation, and the sluggish “recovery”, Obama already faces an uphill battle for reelection.

While trying to hang the “flip-lopper” anvil around Mitt Romney’s neck, Obama has demonstrated a major flip-flop from his earlier position that marriage is “between and a man and a woman.”

Romney has never wavered on gay marriage, opposing it. You can begin to put the undecided votes in his column.

Even in California where Proposition 8 passed 52 percent to 48 percent, a gay rights measure was struck down by the courts and currently is making its way through the appeals process. In 2006 Arizona similarly passed a gay marriage measure by a slim 51 percent but voted two years later to ban it.

Obama is now trapped between liberals who favor gay marriage and a significant margin of socially conservative voters who oppose it. They are likely to decide the 2012 election.

Obama has always been pro-gay rights. His administration has members who are either gay or favor gay rights initiatives. After Obama’s pro-gay marriage statement, his Secretary of Education, Arne Duncan, lent his support, but before being exposed and forced out from his position as DOE’s Director of the Safe and Drug Free Schools program, Kevin Jennings was the founder of the radical Gay, Lesbian, Straight Education Network.

Former President Clinton ran into a firestorm of resistance when he said he thought gays should be allowed to serve in the military. Obama got rid of the “Don’t ask, don’t tell” compromise.

Political pundits are a cautious lot. They know a lot can happen between now and Election Day. While the economy will unquestionably be the over-riding issue in November, the issue of gay marriage is not going to go away. Gay marriage will be the final nail in Obama’s political coffin.

My friend, you are SPOT ON! I live in North Carolina, so I can tell you that resistance to the fraud known as gay "marriage" is deep and widespread. The TelePrompter in Chief has just lost this state -- not that he had much chance carrying it again, since he has to run on an actual record this time, not just vague promises.

Calling me a homophobe is a total misnomer, a phobe, root for phobia, indicates some sort of fear, I am NOT afraid of homosexuals, I simply find them sickening...

With ANY luck this will be the death knell for Obama and Company, and maybe a reprieve for America!

I hope you're right Alan. We can't afford another societal pillar to fall - our society already struggles with its lack of morals!

What can I add to this?...nothing, as far as I'm concerned, you 'nailed' it Alan...my sentiments exactly, and 'music to my ears'!

Very good article, Alan. It makes me wonder if The Impostor's previous difficulty in accepting gay marriage was his Muslim upbringing rather than an acknowledgement of history, religions going back as far as 5,000 years. Muslims detest homosexuality. You are right that he has stepped into a hornet's nest. And Texas Fred, you're right about homophobia. I prefer to say "heterophile". I'm still uneasy about Obama saying to the Russian, "You know, it's my last election..." ala Venezuela or Cuba.

I'm beginning to think that Obama knows he's toast in this election and is only doing fund raisers to build up his already considerable fortune.

For example, today The One has jetted here to Seattle to collect cash from the high roller Leftists in Northwest.

I understand it's a $1,000 a ticket downtown just to see him in person and $5,000 to get in the same picture with El Presidente.

A dollar here...a dollar there...And pretty soon The Magic Negro is a billionaire like his buddy George Soros.