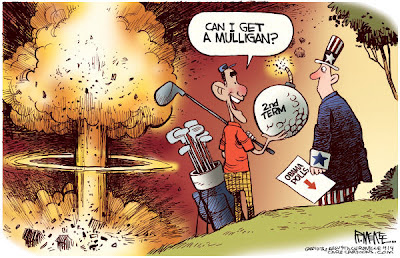 I have always been an optimist. And, I hope, a realist. Of late though, I have been entertaining some pessimist thoughts about the future of America. This runs contrary to one of the enduring attributes of Americans because, like me, they too are optimists.

The great value of national elections is that the issues affecting everyone’s future get discussed. The election of 2008 was an alarming indication of the power of the mainstream media to bamboozle voters. Aided by McCain’s near total lack of charisma or even energy, the media’s wholesale devotion to getting a completely unknown and unvetted Barack Obama elected was and is scary.

One reason for optimism is the way the current campaign to reelect Barack Hussein Obama is struggling to distract voters from the worst record of incompetence of any modern president since Jimmy Carter.

As Obama campaigns non-stop around the nation he never mentions Obamacare, the failed “stimulus” of 2009, or the outrage of the Fast and Furious program to run guns to drug cartels in Mexico. I would put money on the Supreme Court declaring Obamacare unconstitutional. And, with that, goodbye Obama. Feeling a bit more optimistic now?

The problems Americans face today have been put in place by successive Congresses over decades and the blame falls equally on both Democrats and Republicans. Too much socialism!

The 2008 crisis of the housing mortgage and the banking meltdown is the result of government sponsored agencies Fannie Mae and Freddie Mac that own half of all the mortgage loans made. There is no reason why the government should be in the mortgage business that for most of the nation’s history was the providence of the banking industry. It was the “bundled” mortgage “assets” that seduced many banking institutions to purchase them.

The nation’s tax system is shot through with special breaks to various elements of the nation’s economy and includes the highest corporate tax of any nation on earth. It requires legions of lobbyists to maintain the special favors and it ignores the lower corporate tax rates that have made other nations more competitive than ours in the global marketplace.

The problem with America is not that it has millionaires and billionaires, but that it does not have more of them. They and other wealthy Americans pay the bulk of all income taxes while some forty percent of Americans pay nothing. That level of inequality is criminal. So is the tax system. It must be reformed as it threatens to make criminals of all who must deal with it.

The failure to reform Social Security and Medicare is yet another problem threatening the economy as a smaller workforce is required to pay for a growing aged population. A recent Rasmussen poll found that 64% of voters would prefer a government with fewer services and lower taxes. The findings are consistent with findings since 2006. Just 25% want more services.

The hollowing out of the nation’s military power is a major concern because a strong military is vital for the defense of the nation and, by extension, peace in the world.

Ours has a geriatric fleet of fighter and transport airplanes and a naval fleet that hasn’t been so small since the end of World War II. Our missile system is growing moldy in its silos. Our Army, Marines, National Guard and Reserves are worn out from constant rotations in and out the Middle Eastern conflicts in a world where asymmetrical warfare is the order of the day, not massed armies.

Our society is suffering from the erosion of the most fundamental tradition—marriage. The Obama administration announced it will not enforce the Defense of Marriage Act and the President’s endorsement of same-sex marriage is abhorrent.

Popular culture has degraded to films that are either cartoons or based on characters from comic books. Movies made for adults are becoming a vanishing genre. The nightly fare of situation comedies is filled with characters for whom casual sex is the norm. The nation remains a mecca for drugs at the same time our southern border remains superficially protected while drug cartels fill the streets of Mexico with the beheaded bodies of their rivals.

Our educational system has been so debased by the teacher’s unions since the 1960s that it is commonplace to learn that our children continue to lag behind all other nations in the fundamental knowledge of reading, writing, science, history and all other fields of knowledge on which a successful nation depends.

The nation’s unions are bankrupting states with their excessive demands for salaries, health care options, and pensions. They must be curbed and we are witnessing states like New Jersey and Wisconsin that have begun to reduce this drain on public treasuries.

Lastly, the programs advanced by wealthy environmental organizations such as Friends of the Earth, the Sierra Club, and others have imposed a vast matrix of laws and regulations that are putting at risk our ability to conduct any business enterprise. The Greens are successfully denying Americans access to reserves of coal, oil, and natural gas and have been seeking to erode property rights, the keystone of capitalism.

As the cartoon character, Pogo, once observed, “We have met the enemy and it is us.”

Specifically, it is a Congress and a federal government that spends more than it takes in, borrowing 40 cents of every dollar spent. That is unsustainable.

At this point I have identified a few good reasons for pessimism, but there is cause for optimism. Despite all the slurs hurled at it, the Tea Party movement that emerged to protest and to repeal Obamacare now has the active or tacit support of millions of Americans.

It will take decades to undo the damage that has been done, but it can be done and there are clear indications that most Americans have had enough of big government, big spending, and big borrowing.

We have just five months and a few weeks until November 6, Election Day. Turn out the usurper. Turn out the cowards in Congress who do not support Paul Ryan’s reforms. Be optimistic!

Mr Caruba,
I seldom comment,but I do wish to say:
I hope your optimism is on the right "horse".
I am optimistic person as well and a strong believer in 'all hard experiences are for a greater cost'..
over the past several months I came to a two-option conclusion:
1. obama does not want a second term!
2. he is coming up with some radical steps to achive it!
His arrogance since he took the messed-up presidential oath January 20th, 2009
is mind buggling...
...times I can recall laced with such utter profinity of leading office is to recall communistic "dear leaders" back in communistic Poland.
The past 4 years is truly stomach revolting experience!!!!

The "Atlas Shrugged" moment is a coming attraction not only in America, but in the world as well, as the dominoes, starting with Greece, will shortly begin to fall.

It will the second collapse of socialism in our lifetimes and bring with it wars, famine and disease, and many who read these lines will be dead in a very few years long before their time.

However, the "RESET" button for the USA will have been pushed and a better nation based on capitalism and the gold standard will rise from ashes of democratic socialism.

This will be the American symbol of rebirth $ - the dollar symbol which is an "S" super imposed over a "U."

Yes, the truth will set us free once again - the truth that there ain't no free lunches - but first it's gonna hurt like hell.