Demanding the Truth about Obama 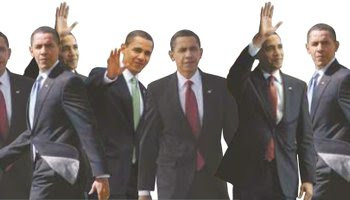 After three years in which the financial crisis he “inherited” but for which he campaigned very hard, his solutions have proven to be failures on a massive, multi-billion-dollar scale. His war on energy has slowed the access to the sources of energy needed to provide the electricity to powers the nation and the fuel that keeps its cars, trucks and other means of transportation on the road, on the rail, and in the air. It has diverted millions to “green” energy alternatives fraught with bankruptcies.

A recent Fox News program hosted by Sean Hannity, bringing together influential authors and columnists, concluded that the mainstream media, the leading daily newspapers and the network news channels, not only failed to vet his life story and his qualifications to be president in 2008, but have provided cover while presently attacking the presumptive Republican candidate who will contest him in the November elections.

The media bias is palpable and thanks to watchdog organizations like the Media Research Center on full display. Increasingly, commentators have begun to describe Obama in psychological terms ranging from pathological narcissist to megalomaniac. The evidence is there for anyone who cares to examine it.

“The rise of the oceans began to slow and our planet began to heal”? The grandiosity of such a claim should have been a warning of the godlike powers he attributes to himself.

His November 5, 2008 acceptance speech after he won the election was filled with the word “change” in ways that should have been a warning too. “Change has come to America” he said. Always the quintessential political animal, Obama was already looking ahead to the 2012 elections. “The road ahead will be long. Our climb will be steep. We may not get there in one year or one term…”

So far as Obama was concerned, his election marked a whole new epoch in the history of the nation and the world. “It is only the chance for us to make that change. And that cannot happen if we go back to the way things were…Let us remember that if this financial crisis taught us anything, it’s that we cannot having a thriving Wall Street while Main Stream suffers”; shades of the coming Occupy Wall Street movement, all too conveniently emerging in the months leading up to the national party conventions.

During the campaign Obama said “We are the people we have been waiting for.” He might as well have said, I am the man you have been waiting for because in Grant Park he said, “This is our moment. This is our time—to put our people back to work and open doors of opportunity for our kids; to restore prosperity and promote the cause of peace.”

The only truly hopeful future for America will be the defeat of Obama on November 6. While some believe he will win the election only two presidents over the last 31 years were not given a second term, Jimmy Carter and George Bush, Sr. In both cases it was the state of the economy that ended their term in office.

Today, unemployment is at historic highs. Homeowners seeking to sell their homes are looking at falling prices, down from just the previous five years. The stock markets have swung back and forth and the S&P 500 rate is lower today than twelve years ago. The nation’s credit rating was reduced for the first time in its history. The net worth of median households has declined by nearly fifty percent since 2003.

Obama added five trillion dollars to the national debt, more than the combined debt since Washington held office, and a threat to the nation’s solvency.

And the search for the real biography, the real facts about Barack Hussein Obama continues. Was he, as his literary biography said, born in Kenya? Why does he have a Social Security number issued in Connecticut, a state where he was never employed? Was Bill Ayers, a former 60s radical, just “a guy who lived in the same neighborhood” or the man who hosted his first political fund-raising effort? Was Reverend Jeremiah Wright a preacher whose black liberation theology someone who was a close family friend or someone whose sermons he never heard or recalled?

Questions, questions, questions. For all the billion of words, for all the books and speeches, the only thing we truly know about Obama is that his presidency has been wracked with failure that reaches down and entraps every American from new college graduate to retiree.

The answer is to turn him out of office in November. That is the only hope and change that Americans can achieve at this point in time.

I'm afraid the only way the truth about Obama will ever come out is AFTER he is out of office, and only then if we elect Congress Critters and Senators that have the fortitude to make it ALL come out...

There are several statements in this column that I must call - charitably - "mistaken." I will quote a couple of them here and elsewhere for posterity.

"Today, unemployment is at historic highs."

In what sense are they historically high? They were numerically higher during the early 80s, and they were higher for much longer during the Great Depression. Is there any way your statement is remotely related to reality?

This is an absurd statement, and not based in any fact. In real wealth, the debt was nearly double its present level under FDR, remaining at such a level until the Eisenhower administration. Nor is it true measured as a percentage against GDP. And even in nominal dollars, it would be asinine to credit Obama with all the debt beginning from his first day in office.

And finally, in all your search for answers about Obama's life, did you trouble to read any of those biographies?

@Alexander. Well, you hve your facts and I have mine. Apparently you are unaware of Obama's stimulus program, his opposition to cutting taxes, his war on energy, etc.

@Alexander. (1) This is MY blog.
(2) I try to make room for other points of view. (3) I do NOT engage in extended debates with those who disagree with me. (4) And most important, GO AWAY. Further comments will not be accepted.

@ Alexander - the cool aid machine is behind you! Off you go chump. There is just no reasoning with the unreasonable. No matter what, he'll vote Obama, because he's the chosen One. Obama could bite a baby rabbit's head off and eat it right in front of Alexander and he'd still excuse it as Bush's fault.

IMHO, Obama is a foreign enemy of the US Constitution

Alexander Davis is obviously getting his "facts" from the wrong sources...

Obama's lackeys in the MSM have indeed done a fine job of keeping mental midgets like Mr. Davis in the dark, but this is the information age. The "truth" can no longer be manufactured and shoved down our throats like it used to be. There are far too many new media and foreign news sources available to us now. The stream of partisan lies and propaganda the Obama administration is generating on a daily basis is not going unchallenged.

Yes, there will still be those who suck up the propaganda and regurgitate it without bothering to objectively evaluate it, but little by little, the truth is becoming harder and harder to falsify.

Apparently, ignorance is bliss for Liberals though. They seem more than willing to accept the Obama administration's warped job and economic numbers, and they're completely oblivious to Congress's runaway spending and complete and unlawful failure to pass a budget. Somehow, they seem to think that Republicans are to blame, but when Republicans tried to freeze the debt ceiling and stop the bleeding, they labelled them "obstructionists". Go figure ...

How anyone can possibly ignore those stark realities, or blame them on someone else is beyond me, but I predict that dopes such as these will come to regret their ignorance and inattention to reality in November.