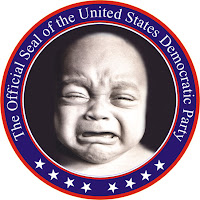 I received a fund raising letter from the Democratic National Committee this week urging me to join and to support President Obama.

How desperate does the DNC have to be to be sending letters to registered Republicans?

The letter included a separate message from Obama and it is instructive as much for what it doesn’t say as what it does. “These are challenging times for all of us who care about reclaiming the middle class security that’s been lost over the past decade, so everyone in this country gets a fair shake and has a chance to get ahead.”

“Over the past decade…” That would include George Bush’s two terms and Bush had no where near the levels of unemployment Obama has. In fairness, the financial crisis did not hit until September 2008 at the end of Bush’s second term. Still, we elect presidents to solve such problems, not contribute to them or spend four years blaming everyone and everything ELSE.

Obama’s stimulus actually cost jobs including his takeover of General Motor and Chrysler, as well as his veto of the Keystone XL pipeline. When you add his war on the coal industry, that includes the mining jobs lost and the shutdown of coal-fired plants.

Like everything else that Obama says or writes, it is deceptive. What follows is an appeal to American values that Obama does not share, given his heavy support of the union movement. “You and I share a vision of a big, compassionate, bold America, where we are all in it together and look out for one another. An America where hard work is rewarded and responsibility pays off—so everybody, if they work hard, if they take care of their responsibilities, if they look after their families, can get their piece of the American dream.”

I seem to recall that George W. Bush ran as a “compassionate conservative”, but Obama’s idea of compassion involved putting as many Americans on the dole as possible. Nearly half of all Americans today are receiving government aid and, in the stagnant economy he has produced, they need it. As for working hard, you need jobs for that and millions have given up looking because there aren’t enough jobs.

“The next 7 months are going to be tough, not just for me but for Democrats up and down the ballot who refuse to accept the idea that we can just cut our way to prosperity at the expense of the middle class, our children and seniors.” Most Americans understand by now that you cannot spend your way to prosperity, that piling up massive debt while failing to reform “entitlement” programs and cutting taxes just means more debt.

As for the next 7 months being tough, Democrat candidates who supported Obamacare and other legislation are losing out in the primaries to those who opposed it. In the polls, Romney is tied with Obama when people compare the two men and, when it comes to who they will trust with the economy, Romney wins.

As for the Democratic National Committee, they worry that “Our get-out-the-vote efforts will be especially critical this year, due to the Republican Party’s extensive efforts to suppress the ability of Americans to register and vote.” Oh, you mean like providing proof that you actually live in the district where you want to register or vote? That you are a citizen and are here legally? That’s what Democrats call suppression.

The biggest fear that Republicans and independents have these days is that Democrats will use Chicago-style tactics to steal the election. One need only think back to the way the 2000 election outcome had to go all the way to the Supreme Court. That time we came within a hair’s breath of having Al Gore as president.

How and why the DNC sent me a membership and fund raising letter is a mystery to me or maybe it’s not so mysterious. Maybe it is a sign of how desperate they are?

That hair's breath would have been disastrous for the entire country and world.

That should send a *message*...

When I received a similar appeal from the Democrats, I was asked to priortize a set list of the most important issues facing the country. I made my # 1 ranking based on what I thought the liberals would consider the least important, # 2 the 2nd least, etc. I also wrote a short remark disparaging their "Annointed One".
Oddly, I haven't heard from them since.

Hate to tell you this, Alan. But at the time I heard "compassionate conservative", I recognized this as an oxymoron. However, it didn't stop me from voting for "W" or sending him a small check. It seems that voting for the least repugnant candidate is normal behavior these days. It won't be difficult for me to choose, but we're 5 months away from convincing our neighbors of the dilemma. The Chosen One and the MSMedia think everything said about him is complimentary.

Travis, I thought the same thing at the same time, but Bush was opposed by two of the worst Democrats on planet Earth, so it was no problem for me to vote for him.

I think Obama will be defeated, but cannot guess by what kind of margin. I hope a very big one, along with the Democrat Party.