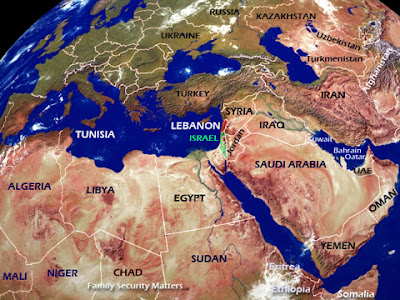 I have a novel idea. Let’s just let the Middle East stew in its own Islamic juices. Along with the Maghreb, the northern tier nations of Africa, down into Nigeria, wherever you find an Islamic regime, you find millions of very unhappy people.

I am not the only one who feels that way, a Monday, May 14 Rasmussen Reports poll found that 63% “believe there is a conflict in the world today between Western civilization and Islamic nations, but most also think the United States should leave the Islamic world alone.”

Will the Muslims ever practice tolerance or accept peace with the West or anywhere else for that matter? No, never. The Koran—which Obama always refer to as the “holy Koran”—is replete with directives to fight for “Allah’s cause” (Koran: 9.88), to “fight and kill the disbelievers wherever you find them” (Koran: 9:5) and twenty other calls to war and murder. There is a reason why their weapon of choice is a Muslim man or woman who is willing to kill themselves in order to kill you.

It is just my opinion, but I believe the present “war on global terrorism” will best be fought covertly with a well-funded, covert intelligence and a counter-terrorism program, not by a massed army followed by a decade of “nation building.”

In the recent past, people throughout the Middle East forced out Tunisia’s despot, killed Libya’s despot, removed Egypt’s Hosni Mubarak from office, and are fighting and dying to get rid of Syria’s despot, Bashar Assad. Both Yemen and Somalia are basket cases with tribal warfare the order of the day. Even the Iranians have demonstrated their unhappiness, taking away Amadinejad’s majority in their parliament. He recently abandoned his usual bellicose talk of wiping Israel off the map.

You cannot point to a single Islamic nation from Morocco to Bahrain that has not had demonstrations intended to pressure their monarchs into granting greater freedom and what we would call democratic reform. As long as Sharia law is in the mix, that’s not a likely outcome.

It took just over seventy years from 1917 to 1991 to bring about the collapse of the Soviet Union, but Islam’s grip on the Middle East goes back to the seventh century. The region is not going to change any time soon and those in power, like Assad, are going to be ruthless in their means to retain it.

The only reason that Saddam Hussein is not in control of Iraq is because the United States and its allies invaded in 2003 and brought his brutal regime to an end. Thank you, George W. Bush, but we should have left right after accomplishing that. Americans are tired of lengthy, inconclusive wars. We have been understandably unhappy with all the conflicts since Vietnam.

Afghanistan has been invaded many times since the days of Alexander the Great and the results have always been a disaster for those who did. Next door is Pakistan which like so many nations in the Middle East has never done anything but take our military and economic aid, and betray us at every opportunity. Egypt’s new leaders are getting ready to throw us overboard.

What I propose is a simplification of a complicated problem and there are few simple answers in a world looking at economic meltdown if debt problems are not resolved. When you toss in a roiling Middle East, it just gets messier.

To begin, let’s stop going to war in the Middle East. We invaded Afghanistan in 2001 and Iraq in 2003. A short, intense bombing mission temporarily drove al Qaeda from its haven and it found a new one in Pakistan, including a safe home for bin Laden. We deposed Saddam Hussein, a major troublemaker in the region, and should have come home. We have little to show for the lives sacrificed and the money spent in both ventures. Billions have been squandered in both nations.

Israel is the only legitimately Western nation in the region, a true democracy. It is America’s greatest ally there. It shares invaluable intelligence at the highest levels of our government. It is a major trading partner with the U.S. Most of the technology Americans use in communications and in our military contains Israeli developed components. All the large U.S. technology companies have research centers in Israel. It also has a very large army and is quite capable of defending itself, but an umbrella of protection should exist because it is strategically important to our own security and Europe’s.

As for the Palestinians, they are a diplomatic sideshow propped up by the United Nations, self-proclaimed permanent victims. It tells you everything you need to know about the Palestinians that they are the oldest existing “refugee” group in the world! Israel has done what any sane nation would do. It built a huge wall to keep them penned up in Gaza, controls the West Bank, and maintains a strong defense on their northern borders with Lebanon and Syria.

Unless the Israelis conclude they must attack Iran’s nuclear facilities, it’s my opinion they will acquire nuclear parity. Despite their bellicosity, the Iranian leadership prefers to use the Palestinians and other Arabs as proxy fighters. Even with nuclear parity they live in a neighborhood where everyone else has nukes; China, Russia, Pakistan, and India have nukes and, of course, Israel.. The U.S. could deliver a nuke with ease.

That said, nuclear war is so insane that even the Pakistanis and Indians backed away from using them despite having fought several conventional wars.

The last time Iran was in a war, it was with Saddam Hussein’s Iraq from 1980 to 1988 and it turned out very badly for them. They lost over a million men and it was fought to a stalemate. That memory is still very much alive in the minds of Iranians.

Islam is not one big happy family. It is sharply divided between the Sunnis, the majority, and the Shiites. It will be generations before the Muslims ever manage to live with each other in the Middle East without the prospect of these two groups killing one other with regularity.

Why do Muslims hate the West? Despite the fact that there are more than a billion Muslims in the world, they believe they are under attack. Defending Islam is their number one concern. They also believe they must impose an Islamic caliphate on the entire world

At this point in time, the U.S. has other priorities. Or should have.

Our military needs a rest and more muscle in the forms of new ships, new airplanes, and the R&D needed to fight future wars. The U.S. needs to solve its economic problems. We have a huge debt and deficit to reduce. We have millions of Americans out of work. We have others who are losing their homes. We have a failed educational system to fix, roads to repave and bridges to maintain.

We can still park our navy off the coast of the Persian Gulf. We can still maintain bases in the Middle East in places like Bahrain and Kuwait. It’s called readiness.

However, it must also be said that, within a decade’s time, by developing our own vast energy reserves, we could cut our dependency on Middle East oil and leave the Middle East to its own fate.

Muslims hate the west for the same reason they hate each other. Islam is a religion of hate. That makes it endemic to their culture. As long as Islam is considered a religion with adherents to Islamic concepts, they will continue their hateful actions.

We really do need to get that!

Agree 100% Alan. The West needs to stop interfering and allow these countries to rule themselves. Why do we always think we know best? No more aid, no more support, no more anything. Let them figure it out on their own. When their own people see how backward they are compared to more advanced countries then they will have to change the country from within - not from outside! America and NATO need to leave Afghanistan tomorrow and leave the Taliban and Kharzi to their fate. They have their pals Pakistan there to support them. NO MORE AID and no more feeling sorry for their women and children. I learnt as a child that you can't save all the neglected animals - and so it follows that you can't save all the neglected people!

Detailed knowledge of history is most interesting.

Most do not know how exactly this nation became dependent on crude oil from Saudi Arabia, and it wasn't because we actually were short on crude oil ourselves. It was because with knowledge developed during WWII, it was a bit cheaper to ship crude oil in massive quantities than pump it here in the US.

Of course, since I am 76 years old now, I watched the creation of Israel from its beginning.

IMHO, the fact that Arabs were given the most miltary sites by the exiting Brits, and the Israelis nothing, it was indeed a miracle that Israeli won the first war between the arab nations and Israel . . . and every war since then.

Islam has no central authority, and all religious control is local.

Unfortunately, people here in the US have little knowledge of the Arab/islamic culture, but those in Israel certainly do.

Islam has always been a religion of self enmity and death. We should indeed stay well away from them, and completely support Israel.

Not one of those nations is worth "building" (with the exception of Israel, and it is perfectly capable of taking care of itself). We are fighting the war against islam in America and making steady progress. Please help awaken the sleepy sheep in your surrounds.

The best course is to use disinformation, etc., to instigate wars between Muslim states.
It's easy and it's effective.

The bottom line is that we are fighting a culture war with bombs and missiles.

Unfortunately, our cultural defenses are in a worse state than our military defenses were prior to WW2.

Alan, the Iranians are cowards. They won't do anything unless they've got the UN, the PLO and the rest of the alphabet soup out there doing their fighting for them. I just hope that if Israel DO attack Iran, they don't destroy the last F-14's the Iranians have: the Tomcat's my favorite jet ever, and they should be recovered post-haste!