Apologizing to Our Enemies 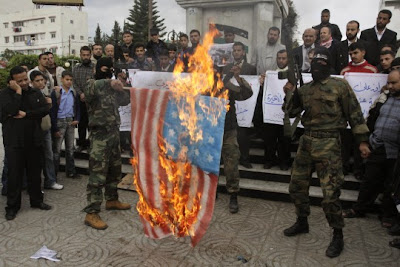 All Presidents are hostages to events. It is, however, the manner in which they respond that shapes their outcome.

By the afternoon of September 11, the Obama administration scrambled to disavow a statement to the assault on the U.S. embassy in Cairo that had been issued by the embassy.

The statement said, “The Embassy of the United States in Cairo condemns the continuing efforts by misguided individuals to hurt the religious feelings of Muslims—as we condemn efforts to offend believers of all religions.”

“The statement by Embassy Cairo was not cleared by Washington and does not reflect views of the United States government” an unnamed administration official told Politico.

But the statement did reflect the Obama administration’s views as expressed repeatedly over the years. Indeed, in condemning the killing of the U.S. Ambassador to Libya and his staff, issued on September 12, was repeated in President Obama’s statement. “While the United States rejects efforts to denigrate the religious beliefs of others, we must all unequivocally oppose the senseless violence that took the lives of these public services.”

The attacks, deliberately timed to coincide with the eleventh anniversary of the worst attack on the U.S. homeland since Pearl Harbor on 9/11, the administration made no effort to connect them. It made no effort to explain to Americans that this nation is at war with Islam, a war made manifest in Afghanistan following 9/11, pursued against the dictator Saddam Hussein, and which the President himself has been personally carrying out with drone attacks on al Qaeda leaders in Yemen and in Pakistan; a war personified in the ten-year effort to find and kill Osama bin Laden.

It was a war declared by Iran when, in 1979, Islamist revolutionaries scaled the walls of the American embassy in Tehran and took our diplomats hostage for 444 days until releasing them the same day Ronald Reagan took the oath of office for his first term in office. He would later order an attack on Moammar Gaddafi, the dictator of Libya after he sponsored terrorist attacks carried out against American targets in Germany and the bombing of an airliner over Great Britain carrying Americans. Gaddafi sued for peace.

If Obama had announced that the proposed funding to Egypt would not be sent, nor similar support for the nascent Libyan government that replaced Gaddafi then, at the very least, a message would have been sent that we will not support governments that stand aside when such attacks occur.

Obama’s “diplomacy” with the Middle East has been a message of apology.

All this is reminiscent of former President Carter’s failed attempts to assert American power and outrage. For all the criticism of President Bush, after 9/11 he swiftly authorized the bombing of al Qaeda and the Taliban in Afghanistan. Obama has been trying to open lines of communication with the Taliban instead of steadfastly pursuing a policy of destroying them. In this regard, ignoring Pakistan’s support for them has been a failure of spectacular misjudgment.

Never forget that Osama bin Laden was found and killed in Pakistan where he had received sanctuary, living barely a mile from that nation’s equivalent of our West Point academy.

Contrast that with Republican candidate, Mitt Romney’s response to the Libyan killings. “I am outraged by the attacks on American diplomatic missions in Libya and Egypt, and by the death of an American consulate worker in Benghazi. It’s disgraceful that the Obama administration’s first response was not to condemn attacks on our diplomatic missions, but to sympathize with those who waged the attacks.”

This goes way beyond the politics of the current campaigns. It goes to the heart of the fact that America has been under attack since the killing of marines in Beirut in 1983 and by the attacks on our embassies there and in Africa, and the attack on the USS Cole in Yemen.

Islam is at war with America and the West. Iran has covertly been waging this war. And the Obama administration’s response has been to attack our only true ally in the Middle East, Israel, openly withdrawing from support for a nation that, along with ours, is threatened by Iran.

We must stop apologizing to our enemies and begin to punish them before they once again bring their war to our shores.

Immediately after the Embassy attacks WE offered *apologies*.

This morning it’s *condemnation in the strongest possible language*.

What does it take for us to hear *Load up the B-52’s and CARPET BOMB the bastards*?

It is clear to me that Obama will do anything he can to placate the Muslims. Offending them is the last thing he wants to do, even to the point of keeping those he has appointed from saying "Islamist Extremists". It makes me sick to my stomach.

Excellent article on this 9/12!

As many of us predicted many times since September 11, 2001 - a limited war and appeasement of Islam was doomed to failure.

Like the German Nazis, the Italian fascists and the Japanese Imperialist of the 1940s - the Islamists will only be stopped by a total war and a harsh military occupation of their Homeland.

I cannot conceive what the "war room" must be like with the big "O" in charge. I know that our military leaders are simply yes men, but I never thought it would come to this. We are ignoring an attack on our soil. As of right now, I haven't even heard anything regarding the official explanation for our inaction (cowardice or treason).