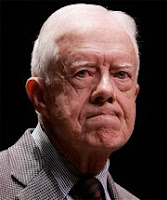 Here are some quotes from a speech delivered to the entire nation:

“Energy will be the immediate test of our ability to unite this nation…From now on, every new addition to our demand for energy will be met from our own production and our own conservation.”

“To give us energy security, I am asking for the most massive peacetime commitment of funds and resources in our nation’s history to develop America’s own alternative sources of fuel—from coal, from oil shale, from plant products for gasohol, from unconventional gas, from the Sun.”

“We will protect our environment. But when this nation critically needs a refinery or a pipeline, we will build it.”

“You know, we can do it. We have the natural resources. We have more oil in our shale alone than several Saudi Arabia’s. We have more coal than any nation on earth.”

This speech was delivered on July 15, 1979 by President Jimmy Carter. Thirty years ago. It is known as the “malaise” speech and may have done more to end his one term in the Oval Office as any other stupid thing he said or did.

On April 2, 1980, Carter signed the oil windfall profits tax, thus ending any prospect that U.S. oil companies would have sufficient profits to build a single new refinery or pipeline. It was eventually rescinded, but for more than 25 years, the U.S. Congress has banned any exploration or drilling for oil off of 85% of the nation’s continental shelf and the present congressional leadership intends to reassert this policy.

Congress continues to ban any drilling in ANWR, an area in Alaska that is barely fit for the animals that roam its barren wastelands. Alaska’s website devoted to ANWR notes that, “According to the Department of Interior's 1987 resource evaluation of ANWR's Coastal Plain, there is a 95% chance that a 'super field' with 500 million barrels would be discovered. DOI also estimates that there exists a mean of 3.5 billion barrels, and a 5% chance that a large Prudhoe Bay type discovery would be made.”

While endlessly blathering about “energy independence” and passing an insane “stimulus” bill, the nation is being led by Barack Obama who is on record as saying, “We will put a cap and trade system in place that is as aggressive, if not more aggressive, than anybody else’s out there.”

Thanks to the Kyoto Protocols, Europe has cap-and-trade systems on the emission of carbon dioxide (CO2) that is contributing to the decline of its economy. Nations such as China and India are completely exempt from any restrictions or limits. There is absolutely no need for cap-and-trade because CO2 plays an insignificant role in climate change, nor contributes to a non-existent ”global warming.” CO2 constitutes 0.038% of the Earth’s atmosphere.

Obama is also on record saying, “So if somebody wants to build a coal-powered plant, they can; it’s just that it will bankrupt them because they are going to be charged a huge sum for all that greenhouse gas that’s being emitted.” Coal-fired plants are equipped with technology that vastly reduces any CO2 emissions and particulates.

Instead, Obama and parts of the alleged “stimulus” bill intends to “invest in solar, wind, biodiesel, and other alternative energy approaches.”

Carter got it right when he noted the vast deposits of coal this nation possesses, but what good is that if Obama wants to end the building of coal-fired plants to generate electricity? This is particularly idiotic given that such plants currently provide just over 50% of the electricity we need and use.

Energy independence is a myth. Oil is a global commodity and is sold on mercantile exchanges for whatever price it can get. If, however, America were to tap its own known reserves and explore for the vast amounts estimated to exist, we would approach a level of independence that would be the envy of the world.

If we built more coal-fired plants, as well as more nuclear plants—something that is desperately needed to meet our estimated needs for electricity by 2030—we would ensure a thriving economy with all the energy it requires.

Carter chided Americans for worshipping “self-indulgence and consumption.” He was replaced by Ronald Reagan who, in his 1981 inaugural address, told Americans that “Government is not the solution, it’s the problem.”

Our government has been captured by the greatest collection of anti-energy, anti-growth, and anti-freedom people to be put in power in modern memory.

We are facing the same energy needs that existed in 1979 and hearing claims that, if we just build enough solar and wind farms we can solve the crisis. It will never work.

“If history teaches anything,” said Reagan, “it teaches self-delusion in the face of unpleasant facts is folly.”

It is folly to believe in global warming.

It is folly to believe we can “conserve” our way to energy independence.
Americans are slowly beginning to awake to the lies with which we have been force-fed by environmental groups, aided by a mainstream press that continues to write of global warming, solar and wind energy, attacks on our energy industries, and the view that the U.S. can borrow and tax its way out of the present crisis.
Posted by Alan Caruba at 6:59 AM

Just a thought, If America leaves it's oil in the ground until all the rest runs low, how much unrest will that cause?

A lot of unrest. As it is, we import most of the oil we need from Mexico, Canada, and Venezuela these days. Saudi Arabian oil is also part of that mix.

The problem is exacerbated by the fact that you cannot build a new refinery or pipeline overnight.

The cost of the Cap and Trade
measures will start kicking in about the time that hyperinflation also kicks in. Energy will be nationalized as they make it unavailable for profit.

The result will be millions more will have to depend on the government to get by.

Here is a study on the cost of C & T released yesterday
http://www.marshall.org/article.php?id=636

95% of taxpayers will not be getting a tax cut, but 100% will be subsidizing the Global economy via this sham of catastrophic proportions!

The redistribution of our money will pick up pace and much will flow out of our country at a far greater rate.

The morons are those falling for the scheme, those perpetrating it are just evil. They are destroying the greatest country on earth, the greatest force for good on earth, in order to pursuit something proven to lead to misery wherever it has been tried.

This is literally generating power(theirs, with our money) out of thin air, and has been the master plan for control by these socialists since Gore proclaimed he had "invented the internet"!