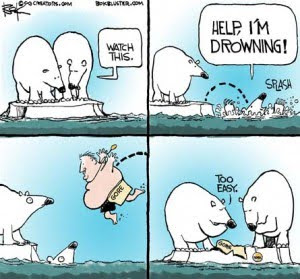 It should tell you something about the federal government’s puerile efforts to advance the global warming (now called climate change) fraud that it had to cancel a scheduled press conference at the National Press Club on February 8th because a huge blizzard had shut down the entire city.

Instead, the announcement of a proposed new bureaucracy, a “Climate Service”, had to be made via a telephone conference call to those reporters either too stupid or too determined to maintain the hoax.

The fact that the Obama administration would attempt to set up a NOAA Climate Service reveals that the same cabal of warmists within the administration are determined to keep the global warming fraud alive and to make U.S. taxpayers pick up the tab. These people constitute a relentless enemy of scientific truth.

Joe D’Aleo, a respected meteorologist, reacted to the news saying, “This was expected. A climate super agency was talked about for years. Could NOAA and NASA have been competing by seeing who could be warmest and take home the prize? NOAA’s statements showed how this whole climate nonsense is politically driven…”

NOAA, for example, is warning of “earlier snowmelt and extended ice-free seasons”, but Steven Goddard points out that “what NOAA isn’t saying is that snow is falling earlier and heavier in the Northern Hemisphere. Rutgers University Global Snow Lab has reported that January was the sixth snowiest on record, and that six of the last eight Januaries were above normal snowfall.” February is set to break former record snowfalls.

NOAA, the National Oceanic and Atmospheric Administration, is, according to Jane Lubchenco, PhD, an administrator, “committed to scientific integrity and transparency; we seek to advance science and strengthen product development and delivery through user engagement.”

A visit to NOAA’s new website, www.climate.gov, reveals how the same old lies about global warming are being trotted out to scare the heck out of a public that has long since concluded it is a vast pile of steaming hot lies.

It’s worth asking why a new climate bureaucracy is needed when, if you think about it, climate trends are measured in centuries!

Do we need a “Climate Service” to tell us that the climate will change a thousand years from now? The proposal is absurd, but not if you see if from the point of view of an administration desperate to expand the federal government until it literally implodes.

The proposed agency would be led by Thomas Karl, the director of the current National Climatic Data Center, headquartered in Washington, D.C., and would have six regional directors across the country. All this to predict what the climate will be in 3010 and beyond!

Consider that we already have a National Weather Service that has the best computer models available and a vast array of satellites with which to analyze the weather. At best it can only accurately predict what will likely occur over the next four days. Predicting next week’s weather is a roll of the weather dice.

Given the reports of how the UN Intergovernmental Panel on Climate Change devoted decades to fudging and jiggering the data on “global warming”, why would Congress even consider authorizing such a “climate service”? Some of those involved included IPCC scientists from academic meteorological centers in the U.S. and some are already under investigation for their role in the fraud, both here and in England.

NOAA and NASA consistently issued statements and reports intended to support the global warming hoax. Leading the effort was James Hansen, the director of NASA’s Goddard Institute, who kicked off the entire hoax back in the 1980s by warning Congress of a completely invented scenario of an Earth endangered by human beings using energy resources from oil to coal.

Al Gore, a former Vice President, has massively enriched himself by scare mongering of the worst kind, aided and abetted by NASA and NOAA, along with determined effort to foist the worst kind of energy sources, wind and solar, on the nation with billion dollar subsidies to these and other “clean” energy entrepreneurs. He is part of an international cabal selling worthless “carbon credits.”

The “Cap-and-Trade” Act, still waiting action in the Senate, would impose a massive tax on Americans for the crime of using energy for any reason. It would destroy what’s left of our economy.

The Climate Service demonstrates that the most thoroughly discredited information and individuals within our government are still determined to push ahead with the global warming fraud. It not only needs to be stopped, but all those involved with it need to be investigated by Congress.
Posted by Alan Caruba at 11:58 AM

I saw on the local NBC news today about the warm weather they are having in Vancouver. They were having trouble getting things done for the Olympics. A thought struck me.. This would be a Great opportunity for gore, "O", IPCC and them other idgitz to call for support for their cause.
But I guess that would depend on whether or not they could dig out from under the record snowfall..??
NBC-New Barrack Channel
ABC- All Barrack Channel
CBS- Cause Barrack Says
MSNBC- Mo' da Same NBC

The ignorance of the article continued from there but with additional hysteria.

The global warming is every where and it is one of the most talked about topic. In India there are many companies which are here debating on the topics of global warming

Sandeep...the Earth has been in a cooling cycle since 1998...it is not warming, nor are the glaciers of the Himilayas melting.

I urge you to be a bit more skeptical of what you've been taught or told.

I've been wondering why Gore, Carol Browner, and all of those who are perpetrating the global warming/climate change scam on the public cannot be charged under the Federal RICO laws. Scheming to defraud the public is against the law...yet now we have our government involved in this insanity. And as long as Obama and Holder have the justice dept. there is little chance any justice will take place here. (It is sweet justice to see DC shut down by tons of snow! Too bad that can't happen for the rest of the next three years.) Someone needs to get Gore on RICO charges. Maybe that would at least encourage the rest to cease and desist.
Great article!