The Ayatollahs Are Asking for It 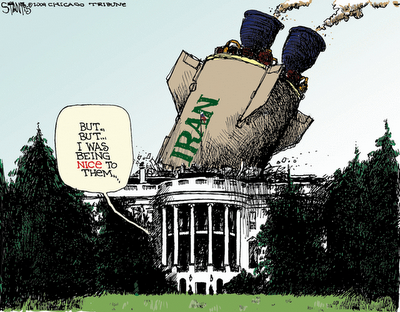 The announcement by Iran’s President Mahmoud Ahmadinejad on the occasion of the 31st anniversary of the Islamic Revolution that Iran was now “a nuclear state” was an invitation to have its nuclear facilities attacked by Israel.

Israel, after all, is a nation that Ahmadinejad said should be “wiped off the map” and hardly a day has gone by for the past 31 years that some Iranian leader has not called for death to Israel and, yes, death to America.

For months now the Israeli air force has been practicing long-range bombing runs, putting their planes on a run to the straits of Gibraltar and back; about the same distance from Jerusalem to Tehran. The U.S. has been supplying “bunker-buster” bombs and there is no doubt in anyone’s mind that Israel has its own nuclear weapons.

This Israeli response to the wars perpetrated against it since the day it declared its sovereignty in 1948 has been to turn out the entire nation to defeat their enemies.

The U.S. will be among the last to know when the attack on Iran’s nuclear facilities will take place. The current administration is no friend to the Israelis, but they have dispatched their top intelligence and military people to Israel and to Saudi Arabia to sound out the when and wherefore of an attack. Meanwhile, the Israelis and their Saudi counterparts have been meeting to discuss the logistics of such an attack.

The Israelis will not wait for the first Iranian missile to be fired at them. In his book, “A World of Trouble”, Patrick Tyler wrote of the history of U.S. Middle East relations from the days of Eisenhower to George W. Bush.

“The first reports of an Israeli air attack on Egypt reached the duty officer at the White House Situation Room at 2:38 a.m. on June 5, 1967. They came from news agencies whose correspondents could hear the bombs going off at air bases on the outskirts of Cairo.”

In 1967, Egypt was ruled by Gamal Abdel Nasser, an advocate of Arab unity and the very definition of a loose cannon. “Lucius Battle, the insightful American ambassador who had just completed two years in Cairo, was deeply troubled by the ‘ungovernable problem’ of Nasser’s demagoguery.”

The problem that has faced every president since the 1979 uprising in Iran has been the demagoguery of the Supreme Guides of the Iranian government since the Ayatollah Khomeini had led the overthrow of the Iranian Shah and the subsequent hostage taking of American diplomats whose release was not achieved until 444 days later when Ronald Reagan was inaugurated.

The Six Day War, a preemptive attack on an Egypt that had massed troops in the Sinai, was an unmitigated disaster for Egypt and expanded the territory of Israel in the wake of its taking of Syria’s Golan Heights, the West Bank, Gaza and the Sinai (later returned).

The Arab response was a conference in Khartoum in which the Arabs asserted its now-famous three no’s. No negotiation, no recognition, and no peace with Israel. Under the leadership of Anwar Sadat, peace with Egypt was achieved and his reward was to be assassinated. A similar peace was achieved with Jordan.

Every U.S. president since then has demanded that Israel return territory in return for peace, but there has never been peace and there is not likely to be any. Islam is a warrior cult based on the Koran; essentially a battle plan to impose Islam on the world.

The Iranian people are a wonderful people, but they are prisoners in their own nation and are currently struggling to rid themselves of the ayatollahs. Israel, however, does not have the privilege of waiting to see whether they are successful or not.

The ayatollahs and Mahmoud Ahmadinejad are literally begging the Israeli’s to attack. They have mocked and deceived the West for decades in their quest for nuclear status and power.

No amount of United Nations “sanctions” will have any more effect on the situation than they did against the former Iraqi dictator, Saddam Hussein.

One of these mornings, the White House Situation Room will be informed of the Israeli attack on Iran’s nuclear facilities and you can be very sure that the entire West and the Middle East will breath a sigh of relief when they do.

The hypocrisy of condemnation that will follow will be vast, but tiny Israel will have saved the world and freed the Iranian people.
Posted by Alan Caruba at 12:05 PM

And nice can get you killed.

There will be wars- Iran, Syria and others who keep funding terrorists such as Hezbolla and Hamas and others. Israel will get blamed as they always do. They could give away every part of their land save for a square mile, and there would still be no peace, and the world would still demand that last square.
I can't stand the treatment Israel has had. I do feel bad for the Iranian people, and I pray they can find a way to rid themselves of tyranny, but you are so correct in that Israel can't take a chance on waiting for that outcome. God Bless you Mr. Caruba, and may He continue Blessing His People!

The animosity between Arab and Persian predates Islam and is even more powerful than the Shia/Sunni divide.

Nothing is cut and dried and simple in this part of the world.

Everybody seems to have forgoten that Isreal bought i think 4 or 5 subs from Germany all with the abillity to launch cruise missiles i wonder where they are at the moment.