The Federal Choke-hold on Education 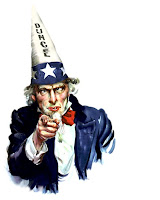 I couldn’t have known it at the time, but my generation that attended schools in the 1950s would be among the last to get an education that the federal government hadn’t dictated or the United Nations had not infiltrated.

The education I received was intended to be primarily a function of local communities with oversight by the states. I often remind people that the word “education” does not appear in the Constitution as a function of the federal government because it was always a local responsibility.

As the school systems, especially in the urban centers of the nation, began to grow in size, various social reformers saw the schools as the perfect place to indoctrinate students. Compulsory schooling ensured that masses of young people would be imprisoned in classrooms for the purpose of turning them into productive citizens. The result was and is masses of bored young people.

Many of the innovations and inventions we take for granted were the result of people who did not attend or do well in school. Thomas Edison was sent home because he asked too many questions! He was home schooled after that and the result was countless inventions including the iconic electric light bulb.

The government has decreed that Edison’s incandescent bulb cannot be purchased in the near future in the interest of energy conservation as opposed to actually allowing more power generation plants, coal-fired and nuclear, to be being built to meet the nation’s needs.

If there is an idiotic “solution” to a non-problem, the government will find a way to make it mandatory.

One of the many bad ideas of the Carter administration was the creation of the U.S. Department of Education on October 17, 1979. Carter was and is a dolt. He installed solar panels on the roof of the White House which, when Ronald Reagan took office, were swiftly removed.

Let me be as blunt as I can. There is no need, nor ever was, for a federal Department of Education except as an instrument of the central government to control the curriculum of schools. This one-size-fits-all approach is totally contrary to what any teacher will tell you; children learn at different rates and each needs to have their particular skills and abilities encouraged.

Nat Hentoff, a senior fellow at the Cato Institute, recently wrote of “Real Education Reform” in Free Inquiry magazine. He recalled being in the office of Tony Alverado, then head of the New York City school system (1987-1998), when the reading scores from standardized tests arrived. They were collectively higher, but Alverado asked, “When are we going to teach them how to think by themselves instead of just giving us just what the tests want?”

Almost any educator today would ask the same question. One of George W. Bush’s greatest blunders was the implementation of No Child Left Behind, a pet project of the late Sen. Teddy Kennedy. The present Secretary of Education, Arne Duncan is quoted by Hentoff calling NCLB “not education, since it is tied to bad tests with the wrong goal. The biggest problem is that it doesn’t encourage high learning standards.”

Why then is NCLB allowed to continue? The answer is federal control.

Karen R. Effrem, MD, the EdWatch Director of Government Relations, has sounded the alarm over a slick deal involving more good money thrown down the federal education rat hole. “Without the slightest bit of legislative discussion in either chamber, the Obama administration quietly slipped $4.35 billion in education funding into the stimulus bill passed last year for a program called Race to the Top (RTTT).

“The federal government is using this program to bribe states to accept even more federal control of education, a constitutionally and traditionally state function.”

“RTTT is accomplishing more of that same federal control without having to go through the messy process of reauthorizing the controversial NCLB.”

Hidden within the stimulus bill, RTTT has NOTHING to do with stimulating jobs or the economy in any way, but it does require states to accept the Common Core Standards Initiative. Thus initiative is funded and promoted by the National Governors’ Association and the Council of Chief State School Officers. Proudly they note that it is “internationally benchmarked.”

As of mid-January, 41 cash-strapped states have signed on to this monstrosity and the result is that American school children will be taught a curriculum largely devoid of traditional American values such as the God-given rights of life, liberty and property in favor of UNESCO’s Baccalaureate Organization program.

In short, American children will be taught that the only rights they have are those the United Nations says they have. Its Earth Charter states that “sustainability education” advocates “the promotion of equitable distribution of wealth within nations and among nations.”

Now, let me see, who is it that believes in the distribution of wealth? Barack Obama!

A beacon of things that could come: it seems likely that a federally controlled health system will go down the same path as our education system...some will become doctors because they have the calling, like some teachers now...but many of the best and brightest will not due to the uninviting clogged bureaucratic system and non-competitive pay. Health Care will be like the education system now: OK but, not near as good as it could and should be.

I didn't do very well in school Mr. Caruba, and I always thought it would be really cool to be able to stay home and learn. I'd never heard of home schooling, but I knew that if and when I had kids, I wanted to let them learn at home. Years (decades!) later, when my son was born, I was exstatic to find out about a large homeschool community here in Florida. I found an excellent co op and support group here in my own town. Yes, we are a Christian group, but there are many others who are of no religious persuasion and who choose homeschooling for other reasons, but most if not all of us do because of much of what you just posted about.
I had never heard of any of the adhd/add type "disorders" when I was young, but reading and researching about it, I know I was adhd, and still am in some ways, but grew out of most of it. I have another group of moms and kids of all ages who get together once a week (in addition to phys ed and co op days) and all of our kids, if in public schools would be either sent home constantly, or put on drugs. Every kid is different and learns at different levels- and shoving them all into groups of 20-30 of the same age, and having them indoors for 8 hours a day is not natural. My son has a problem with some subjects, and I know if I had him take the state tests (which thankfully in Florida is NOT required for homeschooled kids) he'd not do well on math. However, he is flourishing in other subjects such as the sciences, which I know he'd not be allowed to take advantage of his interest in the levels he's at in public school grade level 3. Interesting that polls show that more girls are taking science type courses in highschools and colleges- and not as many boys. That's because for years now public schools have been "bigoted" against boys, following the feminist thought that girls need more than boys do.
Thank you Mr. Caruba for posting this. There are millions of us out here trying hard, and as I've said before, hopefully many of these kids will be able to counter the mind controlled young people being shipped out of public government schools. I also hope and pray that if the feds ever think they can regulate ALL children, there will be enough of us to say "NO WAY!"
God Bless you and thanks again Mr. Caruba~

Carolyn, I cannot speak with any authority on the subject, but I believe superiority in one area of learning or not is mostly a right-brain, left-brain thing in which the student is more or less "wired" to do well in one subject as opposed to others. I could never do arithmetic (son of a CPA!)but I was good at writing (surprise!)and other subjects.

As to attention deficit syndrome and such...I believe it is mostly the boredom involved with always having to learn "to the test" with no real opportunity to learn beyond it. That is largely what education has become these days.

That is so true Mr. Caruba. I am very right brained LOL as in artistic and creative thinking,and was never very good at memorization, which explained my math, physics and history grades! I do love history, but learn much better by reading- not memorizing who did what and when. I'm finding that a lot of the kids in our groups display right or left as well. And about the ADHD, you are on to something there too. I hesitate to place a lable on everything, because kids have been hyper and easily bored since creation. I think that the learning in schools- like you say, the learning to the test, is so unnatural for kids, who are, or should be energetic, making it hard to sit still in room. Kids in the old days, before the industrial revolution, stayed home for schooling, and since many families owned or worked around the home in farming, smithing etc., the kids did chores for much of their day, and did other things such as hunting, fishing, trapping etc, or girls helped in around the house- thereby using some of the excess energy. Most kids don't have those kinds of outlets anymore. Thanks Mr. Caruba~ God Bless!

Carolyn,
My sister home schooled her kids, and they are brilliant young adults now. She used resources with a Christian theology. Turns out she was right to do this. I think there is something way wrong with the way children are educated now.

All this is a huge reason I home school my youngest two. They are thrilled to learn world history, they love America, and they are still excited and happy to study math, write poetry and songs, and read!

School would have killed all of that.

Well, hang on to your hats folks, because if this administration has it's way, your selfish, ignorant home-schooling program will become a thing of the past. Just how are these young Americans supposed to be programmed with the proper ideologies when you keep them sequestered in your home? No, it's going to be your duty to send them off to public schools so they can be properly indoctrinated with the proper "progressive, green, community-minded" philosophies. Doing otherwise will be, well un-American.....

I am always glad to hear about other home schoolers! And Guy, I know what you're saying, and I see the moves they want in that direction, but in similar words of the man, Charlton Heston... They'll have pry my son out of my cold dead hands." NO WAY!!