I Prefer Local to Global 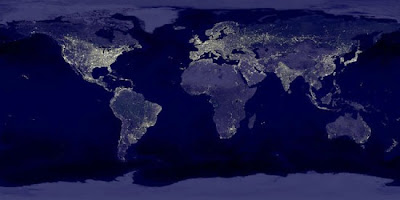 Perhaps it is just the product of the times in which I grew up and my experience with the events of the world. Or perhaps it is the spin that has been added to the word “global”, endowing it with an almost spiritual quality.

Mostly, though, I think it is my utter disgust with “global warming”, having spent the better part of three decades striving to defeat this plot to enable all forms of governmental intrusion into people’s lives and choices.

A bit of personal history; as a child I recall riding the train to and from the Jersey shore when it was filled with young men in uniform, all destined to fight in far-off places whose names even then seemed exotic to me; Iwo Jima, Guadalcanal, Normandy, and Sicily. It was the harsh geography of war, but to a youngster it only meant someplace far away.

By the time I was a teenager, an older brother was already in Japan at the headquarters from which the Korean conflict was conducted. There were new names to deal with, Seoul, Incheon, and the Yalu River. By then the Cold War was well on its way.

The 1950s were full of talk of A-bombs and then H-bombs, and then intercontinental missiles. In college I took scant notice of events in Cuba, but a few years later I would be in full combat gear waiting for orders to invade. Then the problem went away without ever really going away. It has since spread to Venezuela.

Like many Americans, I learned about the world because we were sending troops somewhere to push back against some form of aggression or some new oppressive regime. At home the streets were filled with Civil Rights marchers or anti-war marchers, both of whom would be replaced by new groups demanding to be heard. It was the era of Woodstock and Watergate.

And no trains filled with soldiers because the military had ceased to be every young man’s duty to serve their nation. It became a voluntary military and, we’re told, one that is superior to the former model. It would suffer casualties in Beirut, wrest Grenada from a communist takeover, invade Panama to remove yet another corrupt leader and then, in response to Iraq’s invasion of Kuwait, go there to set things right. After 9/11, in 2001 it would drive the Taliban and al Qaeda out of Afghanistan and then in 2003 invade Iraq to bring down Saddam Hussein.

All of which brings me to the new meaning of “global” for the generations that followed mine. It is attached to “global warming”, the greatest hoax, not merely in the modern era, but in all of history! And it was initiated and implemented by an international institution that was supposed to end wars, the United Nations.

Some years ago, the UN published a book called “Our Global Neighborhood”, but we do not live in a global neighborhood. We live in our own, local neighborhood. The UN is all about global government with, of course, global taxes, a global army, and, as in the case of every dictatorship, a global restriction on gun ownership.

It is all about a vast matrix of global treaties that involve the surrender of some element of U.S. sovereignty to the UN to oversee “heritage” sites and our national parks. It is about an educational indoctrination program to turn American children into “citizens of the world.”

So you will have to forgive me if I look at the world and see places where Americans have continually had to sacrifice blood and treasure because someone or some nation had ambitions to impose their will on people who just wanted to be left alone.

If something terrible happens in America I do not expect to see one single other nation on Earth come to our aid.

In America today, the enemy is not always in some far-off place. It is in Washington, D.C. where an out-of-control Congress is spending and borrowing to the point where we are being warned that our dollar is at risk of being worthless. Led by a feckless new president, it has imposed huge debts on generations yet to be born.

The White House is trying to expand an “entitlement” program, Medicare, that is already broke for the purpose of controlling one sixth of the nation’s economy.

The White House is giving money to banks and then threatening to tax them after they have repaid it.

The White House has bought General Motors and Chrysler instead of letting them go through a bankruptcy process like any other business.

The White House is squandering billions on “clean energy” and “green jobs”, both of which are mere fantasies while billions of barrels of oil go untapped, billions of cubic feet of natural gas remains unavailable, and hundreds of year’s worth of coal is not mined.

Congress is engaged in phony, multi-billion dollar “stimulus” programs instead of cutting taxes to jump-start the economy.

“Think globally. Act locally” is the mantra of the environmental movement, but the movement itself is a global monster, determined to decide what you can eat, how you should deal with your garbage, what kind of car or truck you can drive, how much you should heat or cool your home.

It is despotism, no matter what other name you call it.

And then there are those insane followers of Islam who want to inflict more harm on America because they are not content with killing their fellow Muslims.

I wish I could ignore the world beyond my neighborhood, but it won’t let me.
Posted by Alan Caruba at 11:01 AM

Here here Alan. Sometimes reading just confirms what is in my subconscious, but not quite yet spelled out. That's what your article did for me. Well written, thank you very much.

Thank you, Michael. You just described my job description. :-)

"Think What We Think...Or Else: Thought Control on the American Campus"

I, for one don't want any of the "Kool-Aid"!!
I had a history teacher in school who summed it up perty well.
She said she could judge the economic future of the nation from the actions of her uncle.
When a Republican President got elected, he would buy an additional refrigerator and deep freezer.
When a democrat got elected, he would sell them.

Hi, and aloha. Although I am a progressive democrat, I really enjoy your blog.

The blog gives a very intelligent perspective from the fight wing, er, I mean the Right wing, sorry Freudian Slip. You sure can't get that on Fox, or at a Sarah Palin convention.

On global warming issues, I always point to the hilarious fact, that on the day of the summit, huge icebergs were melting and set adrift in the ocean, which I thought was quite ironic.

This seems similar to all of the "Its snowing in Washington, and its February". Um, I think its still wintertime, and snowing is what happens right?

I do not know, since I live in Hawaii, and I am no expert on snow. I thought you might also find it interesting that it isn't globally cooling either. The fact that I have never seen snow I think proves that.

With all due respect, your new friend from across the aisle.

You may know what the "weather" is in Hawaii, but you do not know what the "climate" is worldwide. And worldwide, a cooling cycle began in 1998. It is a perfectly normal event, but that doesn't mean that Hawaii or nations in the southern hemisphere still are not experiencing warmer "weather." You can cite all the anecdotal information you wish, but it does not alter the overall status of the planet.

I am glad you enjoy my blog posts. Keep reading. You will change your mind.

Thanks. Keep reading MY blog. You might change yours. :)