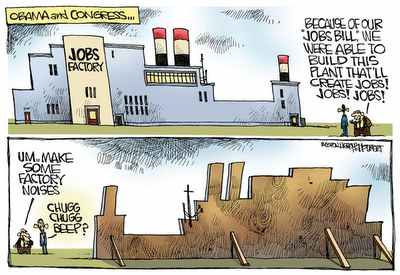 You will not find much about “shovel ready” projects on the White House website, but there is an entire site, Recovery.gov, that extols the American Recovery and Reinvestment Act that was signed into law a year ago.

I generally do not spend much time on federal government websites and especially on those that are the creation of those around President Obama. For example, the White House in November 2009 put out an announcement that Vice President Joe Biden and Transportation Secretary Ray LaHood had “jumpstarted more than 10,000 transportation projects across America thanks to the swift allocation of Recovery Act dollars.” At the time of the announcement, “state agencies reported a total of 10,041 approved.”

As we have learned, news out of the White House has in the past involved state districts that don’t even exist, so I tend not to get too excited by such announcements. The projects mentioned included several stretches of new highway in Florida, Kentucky, North Carolina, and Pennsylvania. So far, good news.

The bad news in November was that, while more than $2 billion in federal highway funds had been allocated to California, only $837 million had been awarded for highway projects. “Even more surprising,” reported Eric A. Morris of The New York Times, “only $51 million, or about 2.5 percent of the total, had actually been disbursed.”

While Joe Biden and Ray LaHood were busy patting themselves on the back, Morris reported that “Overall, the U.S. Department of Transportation has managed to disburse only $5.5 billion to the states out of the $30.5 billion in available transportation funds.”

I don’t want to be too hard on the White House because, realistically speaking, major capital investments like highways require a lot of bureaucratic hurdles to jump before they ever begin. These are in place to ensure that the public doesn’t get ripped off and that those undertaking the projects meet fundamental industry standards.

Still, I recall President Obama telling Tom Brokaw on “Meet the Press” back in January 2009 that he had met with several governors “and all of them have projects that are shovel ready.”

Shovel ready became the instant buzzword of 2009 and it evoked visions of crews of newly employed workers drawing paychecks as opposed to the ten million or more (much more) unemployed workers in the nation a year later.

It turns out that a lot of the “stimulus” money went to states that were in serious trouble meeting pension, Medicaid, and other obligations. By October of last year, reportedly the U.S. Department of Health and Human Services had received $33 billion, the Labor Department $28 billion, Education $21 billion and the Social Security Administration $13 billion. That accounted for 86% of the spending to that point.

So, in fact, the American Recovery and Reinvestment Act essentially authorized the borrowing of more billions of dollars to largely fund various government agencies. If any money falls off the edge of the table and some states get the scraps, well that’s a bonus.

A year later, however, most people have figured out that programs like the Recovery Act and “Cash for Clunkers” are just so much White House smoke and mirrors.

They have figured out that the U.S. simply cannot go on borrowing and spending. And they have begun to suspect that a few tax cuts that would put money back in the hands of consumers and investors would have done a far better job of getting the economy on its feet again.
Posted by Alan Caruba at 5:27 AM

Given that their objective is "Zero Economic Growth" one would not expect them to do anything any differently. For them, all are anathema who even consider fostering economic growth.

And it is not like they are making a "mistake" which, when they become wiser, they will correct. They are doing exactly what will make them on target with goals that are entirely consistent with their totalitarian core "values."

They aren't just wrong, they are evil.

Here's more proof that this is an all out ideological war on all fronts. It is one we have no choice but to fight and win.

I repeat, they are evil. They must be stopped. If Conservatives regain power and yet again fail to fix the problem, then the chance of victory will be slim.

I'm disgusted with Charlie Crist in our state for grovelling to obama. The "shovel ready" jobs, including a so called high speed train, which in the past 2 or 3 Florida elections was voted down by the people. Now they're going to build it because of stimulus money? Our state is still at over 11 percent, and the fed and state are disasterous. Thank you Mr. Caruba for always bringing up these disasters. Hopefully there are a lot of people waking up!

Ohio is supposed to get $400 million for a high speed train, that won't be high speed because the tracks won't support it, and there's no money to upgrade the tracks. Meanwhile, intelligent people are asking questions like "who pays the rest?" (because 400 mill won't get it done) "who will pay to maintain it?" (because the state is currently broke) and "who will ride it?" (because it will take four hours to go to Cleveland from Columbus, when you can drive it in two). We had train service until about fifteen years ago, and it collapsed due to lack of interest. The stupidity just goes on and on ...