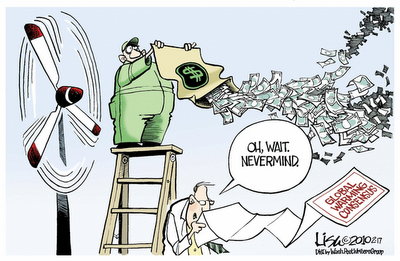 As the massive global warming fraud implodes, the one aspect of it that has not been explored in depth is the equally massive waste of billions of dollars spent by the United States and nations around the world, we were told, to avoid global warming.

Whole industries such as automobile manufacture had demands and limits put on them. Some states required utilities to buy “carbon credits” to offset their use of “fossil fuels.” The list of things attributed to global warming expanded to the point of total absurdity.

The codification of the fraud into law began with the Kyoto Protocol, an element of the United Nations Framework Convention on Climate Change whose purpose was to fight a global warming that we now know was not happening.

The data to support the fraud came out of the UN Intergovernmental Panel on Climate Change (IPCC) that specialized in distorting climate data in every way possible to emphasize a normal warming cycle and then to minimize any indication of a new cooling cycle dating to around 1998 or earlier.

The IPCC data, released periodically in reports purporting to be the work of some 2,500 scientists from around the world, were actually based the handiwork of a few academic centers such as the Climate Research Center (CRU) at East Anglia University in England, Penn State University, the National Center for Atmospheric Research in Boulder, Colorado, and climate modeling from the Lawrence Livermore National Laboratory in California.

Other participants in the fraud were NASA’s Goddard Institute and NOAA, both of whom produced claims, predictions, and questionable data to support “global warming.”

In the U.S. alone, I have heard figures in the area of $50 billion that have been spent on “climate change” over the course of administrations dating back to Clinton. In England, between 2006 and 2008, the government spent the equivalent of nearly $14 million (U.S.) on publicity stunts to convince Brits that global warming was real.

It is legitimate to ask if global warming has not in effect been a criminal enterprise.

The Kyoto Protocol required the nation states that signed onto it to commit to a reduction of four “greenhouse” gas, carbon dioxide, methane, nitrous oxide, sulphur hexafluoride, and two groups of gases, hydrofluorocarbons and perflourocarbons. These gases occur in minimal amounts in the Earth’s atmosphere which is composed primarily of 95% to 97% water vapor!

The cost of accepting this commitment is measured in several ways, not the least of which was the sale of “carbon credits” to utilities and to industrial enterprises that would permit them to function outside the limits imposed. The exchanges created for this purpose prospered but it increased the cost of providing electrical energy and the manufacture of all manner of products.

The limitations, however, did not apply to either China or India, both of which were exempted, as were undeveloped Third World nations.

The climate change fraud also affected major U.S. corporations, none of whom wanted to appear to be opposed to it. However, on Tuesday, February 16th, BP America, Conoco Phillips, and Caterpillar all announced they were dropping out of the Climate Action Partnership that advocated energy-rationing. Some of the millions squandered on various global warming and “environmental” projects and groups came from the bottom line of corporations across the nation.

At this point, any corporation that speaks of “climate change” in its advertising and other public statements is part of the global fraud that originated in the United Nations Environmental Program.

The carbon emissions limitations also served to justify huge public subsidies for U.S. producers of wind and solar energy, called “clean” energy. Several nations, such as Spain, Germany and Great Britain, invested heavily in these alternative energy sources only to discover that they were massively inefficient and unreliable.

At the same time, the global warming fraud in the United States limited the building of coal-fired plants to generate electricity when, in fact, coal provides 50% of the nation’s electricity needs. Combined with fears of nuclear energy dating back to the 1970s, the United States has essentially starved itself of the energy it needs.

According to a recently released study by the National Association of Utility Regulatory Commissioners, the U.S. gross domestic product would lose $2.36 trillion and American consumers will pay an additional $2.35 trillion for energy if the oil and gas on federal lands remain off-limits through 2030. This constitutes a form of energy and economic suicide!

A British newspaper, the Daily Mail in a recent interview with CRU Prof. Phil Jones, revealed he knew there had been no “statistically significant” warming for the past fifteen years. Little wonder Prof. Jones and the CRU refused to honor UK Freedom of Information requests for the data on which the IPCC claims were based. He and others who provided IPCC data are under investigation.

In essence, the IPCC reports were all fraudulent and all were used to advance the global warming fraud. That is why President Obama’s claim of “overwhelming evidence” of climate change, i.e., global warming is particularly troubling.

It is essential to understand that the “Cap-and-Trade” legislation passed by the House and waiting for a vote in the Senate is based on the IPCC reports and the threat by the Environmental Protection Agency to begin regulating carbon dioxide emissions throughout the nation have no legitimate basis in science.

There are still billions at stake if global warming-related laws, projects such as wind farms or the requirement that ethanol be added to every gallon of gas purchased are permitted to proceed or continue.

Global warming as an issue or basis for any law or expenditure of public funding no longer exists.

It’s long passed the time when the nation’s news media should stop referring to it as anything other than a fraud perpetrated on the people of the world.
Posted by Alan Caruba at 12:58 PM

Nice insights again Alan!
I sure enjoy your posts!

Thank you, Scott. Like the sign over the door says, we deal in facts, not fantasy, here.

Great blog. Nice piece of work. If we all dwelt in fact and not fantasy, so would our politicians. Shouldn't be too much to ask, eh? It's a little hard sometimes to determine the facts, where there is so much bull crap floating around. Say what, Obama?

@d: When you can write a commentary like this every day, you can criticize, but for now I am sticking with my interpretation.

Why is it that the experts and politicians are always the last to know? The warmist cult has been going full tilt since about 1980, dragging many of the world’s socialist government leaders, including the obama, down their black hole, and wasting billions of dollars. Dollars, by the way, that could have been spent on truly serious environmental problems, reducing deficits, you name it. Now even the most ardent among them have finally had to admit that there has been no statistically significant warming since 1995. This is remarkable. For half of the last 30 years, there has been no warming. Nor have any of the alarmist’s dire predictions come true. I would not be surprised if before long, the experts also admit that we are now in a period of global cooling. How long would you speculate it will take before our leftist leaders finally accept that the latest excuse they have used to expand government, reduce our freedoms, redistribute our wealth and socialize our economy is just the shadow the rest have always known it was?

Why is it that the experts and politicians are always the last to know? The warmist cult has been going full tilt since about 1980, dragging many of the world’s socialist government leaders, including the obama, down their black hole, and wasting billions of dollars. Dollars, by the way, that could have been spent on truly serious environmental problems, reducing deficits, you name it. Now even the most ardent among them have finally had to admit that there has been no statistically significant warming since 1995. This is remarkable. For half of the last 30 years, there has been no warming. Nor have any of the alarmist’s dire predictions come true. I would not be surprised if before long, the experts also admit that we are now in a period of global cooling. How long would you speculate it will take before our leftist leaders finally accept that the latest excuse they have used to expand government, reduce our freedoms, redistribute our wealth and socialize our economy is just the shadow the rest have always known it was?

Your comment has been rejected because this blog will not be a platform for the repeated and inaccurate claims that the Earth is warming at the same time major records of snowfall and temperature are falling in the wake of an obvious increase in cooling.

To those who keep insisting that water vapor as a so-called greenhouse gas is not a significant part of the Earth's atmosphere, this is what NOAA has to say about it:

"Water Vapor is the most abundant greenhouse gas in the atmosphere, which is why it is addressed here first. However, changes in its conentration is also considered to be a result of climate feedbacks related to the warming of the atmosphere rather than a direct result of industrialization. The feedback loop in which water is involved is critically important to projecting future climate change, but as yet is still fairly poorly measured and understood."

The SUN is the predominant factor as regards whether the Earth warms or cools. This is not hard to understand unless you are still wedded to the greenhouse gas claims of the warmists.

We live on planet Earth, not inside a thermos bottle.

Here is another blog to visit. It offers "75 Reasons To Be Skeptical of Global Warming" including verification of the science facts I cited.

The problem with global warming and those who still believe in it is the way they attack the actual science in a desperate effort to keep the Big Lie going.

We all need to send articles like this to the PBS Ombudsman and ask WHY our tax dollars and contributions are used to finance the censorship of Climategate, etc. on the PBS NewsHour

Alan,
I'd like to believe that you're just mis-informed, and through some learned stubbornness you refuse to read more than you have or consult sources other than your favorites. That would be more charitable than assuming that you were actively and intentionally trying to mislead other people - knowing that your information was false.
One way or the other, your preposterous claim that all of the world's scientific societies in coordination and agreement with all of the world's national governments are engaged in the secret conspiracy to (essentially) commit collective suicide by some nefarious means is just insane.

@Michael O'Hara:
Insane or, to be charitable, irrational, is precisely the explanation why so many politicians and scientific organizations allowed themselves to believe that the Earth was in immediate danger of burning up.

Money, of course, in the form of government and foundation grants explains why so many scientists sold their reputations cheap in order to cash in on the fraud.

Politicians are always eager to run to the front of the parade so anything they say must be taken with some skepticism.

If you continue to believe global warming is real, you will soon be regarded as a total fool by friends and family.