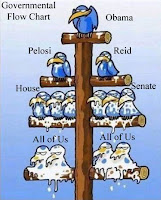 I have a cousin with whom I speak every day throughout the week, often two or three times a day as both of us work out of offices that leave us fairly isolated from people. He is a top financial advisor to the wealthy, working from his New York office, a short stroll to his university club for a lunch. My office is in my suburban apartment, separate from the living quarters.

Politically, no two people could be more unlike each other. He is a liberal and I am a longtime conservative. We rarely agree on politics and policies, and so we wisely never talk about either. What we do, having shared memories of a family of artists, authors, lawyers, doctors, plus a bevy of cousins, nieces and nephews, is entertain one another to pass the day.

The perceptions Democrats/liberals have of Republicans/conservatives are tribal. In some ways they are dehumanizing. And in too many ways they are dependent on demonizing the opposing party.

In between is a growing legion of “independents” who do not want to be identified or affiliated with either party. And, of course, they are demeaned as “tea-baggers” by the far Left, but regarded as true patriots by the far Right.

In point of fact, politics in America has always been a blood sport. As the nation’s first president, George Washington expressed great concern for the development of what he called “factions”; what we now call political parties. Their emergence once the first Congress convened and the business of the nation was on the table was instantaneous. The early struggles for the presidency were rife with the most vile slander and liable.

This brings me to an article in February 2nd edition of Huffington Post, the popular and liberal website. “Large Portion of GOP Thinks Obama is Racist, Socialist, Non-U.S. Citizen: Poll.” The title alone suggests over-reach, hyperbole, and struck me as silly. Arianna Huffington’s statement that Rush Limbaugh makes up stuff struck me as false and insulting. He would not last long if he did that.

Based on a poll of “more than 2,000 self-identified Republican voters” was described as illustrating “the incredible paranoia enveloping the party…” The poll was taken by Daily Kos/Research 2000 and I would love to have seen how they “framed” each question because that is one way to ensure a desired outcome. Then, too, “a disproportionate percentage of respondents are from GOP strongholds in the South (42%) as opposed to the Northeast (11%).”

So we approach this poll with caution, knowing it regionally favors the South and, beyond that, there is no way to know the respondent’s ages, work status, or anything else of useful insight.

According to the Daily Kos poll,

#39% of the Republicans think that Obama should be impeached,

#36% believe Obama was not born in the United States,

#24% think Obama wants ‘the terrorists to win’, and

#23% think their State should secede from the Union.

According to Markos Moulitsas, founder and publisher of Daily Kos, “They are a party beholden to conspiracy theorists who don’t even believe Obama was born in the United States, and already want to impeach him despite a glaring lack of scandal or wrongdoing.”

Well, I have not advocated impeaching Obama, nor have I heard a single call for his impeachment. (Talk about making up stuff!) I am, however, suspicious of any President who surrounds himself with three dozen “czars” whom Congress was not able to question in order to determine their fitness. One turned out to be a self-described communist.

This is a President whose original choices for high level jobs involved a succession of tax cheats. He also has close ties to the Chicago Democrat machine in a state that has sent several former governors to jail and who includes among his friends an anti-American preacher and an anti-American former accused terrorist from the 1960s. The developer who helped him purchase his home in Chicago was indicted during the 2008 campaign. So, if you begin to connect the dots, you might just be a tad skeptical.

The President, of course, could put a swift end to any question about his place of birth by releasing his actual birth certificate or, for that matter, his entire paper trail of college transcripts and medical reports, but his past has been deliberately sealed from public inspection. Does he have something to hide? You decide.

What we do know is that Americans are frequently sharply divided politically and hold often diametrically opposed views on the conduct of the nation’s business. That gap is narrowing as blue states begin to elect GOP governors, a Senator, and oppose administration proposals.

Beyond that, the swift decline of the President’s approval ratings in more legitimate polls such as Rasmussen Reports suggests that it isn’t just Republicans and independents who have reservations and doubts.

In the 1980s the "others" were called “Reagan Democrats”, but today they are just Democrats, many of whom are unemployed, struggling to pay mortgages, and worried that there will be no Social Security or Medicare when they reach retirement. If the Obama administration continues to bankrupt the nation, they have cause to worry.

As for the multi-billion dollar bailouts and efforts to spend the TARP money the banks have returned, one hardly needs to be a Democrat or Republican to have sincere doubts about more borrowing, more spending, and more taxing.

Mr. Caruba, they'd have a field day if they got a hold of me! LOL I am finding it humorous actually, what names they keep coming up with for folks like me. It used to make me mad, then sad, now it's just so stupid I have to find it funny.
What too, I find interesting (applying the same generalization that the left do) is that your cousin is a financial advisor to the wealthy- yet a liberal. Thought all liberals were so anti capitalist that they wouldn't dare work in such a job. Oh, I know better. God Bless you Mr. Caruba!

Any survey like that cannot be taken seriously. I, for one, would look at a survey like that, quickly identify it as biased and ridiculous, and treat it as such. Much like when I argue politics with a leftist, I'd exaggerate and overstate my positions just to rattle their cage. Anyone who took my words or responses as an accurate reflection of my real positions would be making a big mistake. I'm not exactly sure why I do that, except maybe to get a rise out of whoever it is I'm arguing with, but it's fun and I do it a lot. I feel pretty certain that a lot of people would do the exact same thing on such an obviously biased survey. If people on the left want to convince themselves that this survey actually reflects the views and beliefs of conservative republicans in America, more power to them. The first rule of battle is to identify and understand your enemy. I'd enjoy nothing more than watching the left base their battle plan on bogus information. Just as I've enjoyed watching the left convince themselves that Americans want Obama's brand of government, I'll enjoy watching them ride this misinformation train over the cliff. Come November, I expect to hear a lot of screams coming from that train ...

@Carolyn: You would be surprised how many folks on Wall Street are liberals and how much money from Wall Street goes to liberal candidates. A recent example, the former Governor of New Jersey, Jon Corzine, formerly of Goldman Sachs. After one term, the "little people" of NJ tossed him out.

@Guy: The thing I note most about liberals is how childlike and immature they are. I prefer the company of grownups.