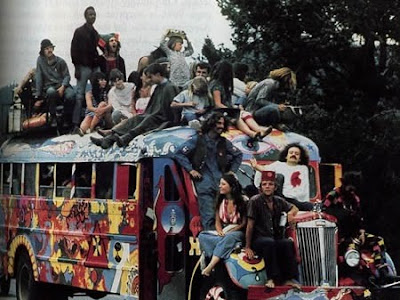 In the wake of the enthusiasm swirling around Sarah Palin, Barack Obama is likely to turn out to be for conservatives what the later years of the 1960s and early 1970s were for the beginning of conservative political ascendancy.

The early years of the 1960s are remembered now as the wonderful years when a young, handsome, and charismatic President, John F. Kennedy, took the nation into outer space and, along with his beautiful wife, Jackie, brought grace and style to the White House.

“You can tell if you were a liberal or a conservative if you thought the sixties were a good or bad decade,” said former Senator Rick Santorum in 2007.

I was raised a liberal, but I recall the 1960s as a mostly terrible decade, filled with assassinations, the growing involvement in Vietnam, and the strife that accompanied the Civil Rights movement. I remember it for the “hippies”, the drug culture that emerged, so-called “free love”, and the beginnings of the feminist movement. The 1960s turned me into a conservative.

In a book only a political junky could love, “Framing the Sixties”, historian Bernard von Bothmer writes that conservatives see the 1960s “as the beginning of the decline of beloved American values: self-reliance, self-discipline, personal responsibility, strong local communities, and love of country.” For liberals, it was “the peak of the quest for social justice.”

Guess what? Social justice in the form of government programs to spur home ownership, even if one could not afford it, led to the recent financial crisis.

The final years of the 1960s were quite awful, filled with anti-war marches and rioting. The 1968 Democrat convention is still etched into political memory for the turmoil it engendered, ironically in the streets of Chicago. His decisions regarding the war forced Lyndon Johnson to forego a run for reelection.

In 1971, the publication of the Pentagon Papers, revealed how the government had deceived Americans about Vietnam for decades, confirming voter’s suspicions and fears. In combination with the Vietnam War, the Watergate scandal further discredited government, forcing the resignation of Richard Nixon. It swung the nation into the embrace of a toothy unknown Georgia Governor, Jimmy Carter, who replaced Nixon’s successor, Jerry Ford.

Carter’s failed presidency yielded the election in 1980 of Ronald Reagan whose political ascendancy, along with the conservative movement, had begun in the 1960s. In 1966, he was elected Governor of California. In 1968 he took his first crack at running for President.

Sound familiar? War-weary from Afghanistan after 9/11 and the decision to invade Iraq, the first decade of the new century led voters to first turn Congress over to the Democrats in 2006 and then, in 2008, to embrace a totally unknown politician from Chicago. Young and a gifted orator, he evoked “change” and married it to “hope.”

One year into Barack Obama’s presidency, even his fellow Democrat politicians are fleeing his far Left program of “transformation”, seeing the embodiment of every socialist aspiration for an all-powerful, huge, centralized government. Every candidate Obama endorsed lost and the Democrat lock on Congress was broken when one of the most liberal states elected a conservative candidate to replace JFK’s younger brother, Teddy.

For the conservative movement and its candidates Barack Obama is the gift that keeps on giving.

As someone for whom the 1960s began with service in the U.S. Army, followed by several years as a journalist, I had a first-hand look at the events of that decade and the one that followed. From LBJ to Nixon to Carter, it is hard to describe how disappointed and angry Americans became. The Vietnam War was bad enough, but LBJ’s Great Society was a classic redistribution of wealth sold as a way to end poverty in America. It didn’t. Only jobs end poverty.

By contrast, Barack Obama’s tripling of the national debt will make debtors of everyone including a generation or more to come if government borrowing and spending is not dramatically reduced. Voters understand this, resent this, and will elect candidates who promise to fix it.

There is a factor that is unique to the present administration. Previous administrations were more or less responsive to public opinion. This one is tone deaf and/or indifferent. As Obama put it recently, “I won’t quit”, and he means it.

He is the liberal’s last chance to impose its extreme socialist agenda on America and, if that means lying to everyone every day, he and his fellow conspirators intend to do it.

The Massachusetts election must have come as a shock. The election of Ronald Reagan surely had the same effect as the 1980s dawned.

A combination of factors presage a significant conservative return to power in the months and years to come.

There is significant distrust of the presidency and the Congress. The effort to expand the federal government is being resisted in the voting booth and in state capitols around the nation.

There is anger at the way huge, 1,000-page bills have been either voted upon unread and in haste or kept from public review and voted through the House and Senate using bribery and pressure tactics.

The mood of the electorate is an amazingly swift reversal from 2008. It bodes ill for Democrats and progressives, and that’s good for America.
Posted by Alan Caruba at 1:42 PM

It was always apparent that the adulation and excitement after Obama's victory would be mirrored by the trough of disillusionment that we now see.

There is a lot to be hopeful for on the horizon and the loss of "liberal" and green credibility looms large. In the USA, the UK and Australia (and no doubt elsewhere) the tides are turning, and provided clear and free communication is maintained they may well stay turned for a very long time.

The current administration is "tone-deaf" is correct. Because they think they know better than anybody else. They have their liberal diploma's from liberal universities, worked in liberal "international" multinationals or banks or IMF's or World Banks or thaught in turn at liberal universities. So of course they are tone-deaf. The CANNOT hear what they CANNOT understand. They CANNOT hear what they have NEVER experienced. They would rather sacrifice democracy "for the good of the people", than to listen to them.
Did I already tell you that I have met the same kind of people from when I was a teenager, high school, university, law school, law firm, multi-national to international organization. The only difference is that THESE people, who I grew up with, are now in the White House. It was just a matter of time... This is the result of 40 years of liberal bull sh***.
Eddy

I was pretty young during the 60's, but the one thing I remember clearly were the riots on OSU campus. I remember sitting with my Mom, watching TV, and wondering if the violence was going to spread out of the campus area and into our neighborhood. At the time, I wondered what they thought they were accomplishing by burning innocent citizens' cars and businesses. I guess the end justified the means for them. Never mind that our poor troops were losing their lives overseas and listening to the news reports, in which they were often called murderers. Never mind that they came home to empty streets, shame, and discrimination. I never forgot that....

To this day, when I hear that phrase used, or encounter someone who lives by that philosophy, I shudder, and I can't believe our Muslim in Chief is one of them. What has happened to this country?