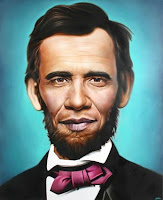 As we close in on Abraham Lincoln’s birthday, February 12, it is safe to say that there will be no Obama memorials in Washington, D.C. for the same reason there are no statues of Jimmy Carter except in the Capitol building where statues of former presidents are a tradition.

I read a book some years ago about the many statues of Lincoln that are to be found throughout the nation. They are a fitting tribute to a president credited with keeping the Union intact. The only thing Americans are presently united upon is reflected in Obama’s falling approval numbers in the polls taken to measure such things.

Back in 2008, I took note of the shameless way the national memory and regard for Abraham Lincoln was used in marketing/advertising terms to “brand” young Obama as someone with the same greatness of character and wisdom as the sixteenth President, 1861-1865.

Obama announced his candidacy on Lincoln’s birthday and he did so in front of the Old State capitol in Springfield, Illinois where Lincoln had delivered his famous “House Divided” speech in 1858.

Immediately, the fawning mainstream media seized upon the image of Obama as a new Lincolnian figure on the American stage. As someone who has spent a long career in public relations I can tell you that this use of imagery and association with Lincoln by Obama’s handlers was masterful. They surely knew that the media would, like Pavlovian dogs, salivate at the opportunity to equate the young half-black Senator from Illinois with the iconic Civil War President.

This imagery included having Obama “arrive” in Washington, D.C. on a train to mimic the way Lincoln had arrived to take office.

Reams of adoring analysis of the Lincoln-Obama connection were written. Evan Thomas and Richard Wolffe of Newsweek magazine, on November 15, 2008, wrote a lengthy and largely nauseating commentary. During an appearance on MSNBC’s “Hardball” with Chris---a tingle ran up my leg---Matthews, Thomas actually said, "In a way Obama’s standing above the country, above – above the world, he’s sort of God."

In his Newsweek piece, Evans wrote, “If there was any one message that defined the Obama campaign from the beginning, it was his promise to rise above the petty politics of division and unite the country. But now comes reality.” The reality, it turned out, was that Obama could not even unite his own party despite a majority control of both houses of Congress.

From my perspective, there is nothing about Barack Obama that can be compared to Abraham Lincoln. Lincoln put some of his rivals in his cabinet. An argument could be made for his selection of Hillary Clinton to be his Secretary of State, but Obama after a series of embarrassing selections that included tax cheats filled his cabinet with slavish loyalists, and then added a layer of advisors, “Czars”, to circumvent congressional oversight.

Lincoln possessed real humility and there is no evidence that Obama has any to call upon. If anything, there is hubris and a narcissism that is increasingly obvious to all and generates derision.

It will not surprise me if some in the media drag out the tarnished Lincoln-Obama comparisons, but like so many other aspects of political reporting, it will just be vacuous blather.
Posted by Alan Caruba at 5:57 PM

You nailed it Mr. Caruba, in saying that Lincoln had a sort of humility about him. Obama hasn't a humble bone in his self loving body. I've never really seen such a person so in love with themselves as Obama. He is so full of pride, it's actually embarassing. Mr.Lincoln, he is not. Pitiful.