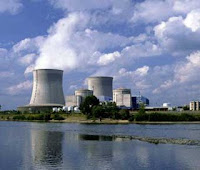 Are you worried about your “carbon footprint”?

Still think “global warming” is real despite the fact that one of its leading advocates, a climatologist, recently said that there’s no significant data to demonstrate any warming since 1995?

Can’t figure out why the White House is still trying desperately to pass the “Cap-and-Trade” bill based on the totally discredited claim that carbon dioxide and other gases in the atmosphere are “causing” the non-existent “global warming”?

Do you increasingly think that you are Alice in Wonderland and now living in a nation where the White House and Congress keep telling you things that are totally absurd?

Let’s put aside the claim that we have to borrow and borrow in order to keep on spending and spending to save the economy when common sense says that is the worst way to end the economic death spiral they have created.

The latest ploy by the White House was a move in the direction of nuclear power to generate the electricity the nation needs for its current and future needs. Since the 1970s, for reasons that defy understanding, several administrations, Democrat and Republican, have done little to encourage nuclear power despite the fact that a nation like France derives most of its electricity from it.

Even so, nuclear provides about twenty percent of the electricity we use while coal provides just over fifty percent. In both cases, neither has anything to do with “greenhouse gases” because the gases play no role in climate change. Indeed, more carbon dioxide, being plant food, would greatly enhance the growth of crops and forests.

“Cap-and-Trade” is nothing more than a tax on energy use. Simply put, it has been cheap, abundant energy that has fueled the economy of the United States since it was founded. The discovery of oil in 1859 also played a major role and, despite the lies, the U.S. has an abundance of oil.

Like nuclear power, however, successive administrations since the 1970s have ensured that U.S. oil companies were kept from exploring for it, extracting it, refining it and selling it to us at affordable prices.

This is in sharp contrast to the endless babble about the need to be “energy independent.”

The talk about support for the nuclear energy industry is welcome, but what the White House is not saying is that his proposed budget has no funding for the nuclear waste facility in Nevada’s Yucca Mountain.

Congress passed a Nuclear Waste Policy Act in 1982 and amended it in 1987. Yucca Mountain is the only permanent nuclear waste repository in the nation. I repeat, the only one. Why isn’t it in operation? Glad you asked. Sen. Harry Reid, the Senate Majority Leader, has blocked its completion and use.

So we could build two or a dozen new nuclear plants—a very good idea—but there would still be no place to put the waste despite the fact that the U.S. has spent $9 billion on the first phase to build the Yucca Mountain site. A $13 million tunnel boring machine sits idle at the site.

That has not stopped the White House from wanting to put U.S. taxpayers on the hook for $8 billion in loan guarantees for two new reactors in Georgia.

The purpose of all this is to get a few senators to sign on to the passage of Cap-and-Trade, a bill based on a non-existent threat from “greenhouse gases” in order to avoid a non-existent “global warming.” There are two fears; one that the Senate might pass the bill and, two, that the White House might impose it by executive order.

What we are witnessing is yet another really big, really bad idea out of the White House that continues to lie to everyone and anyone who thinks the problem is “global warming” when the problem really is a mad desire to destroy of the nation’s economy.

This has always been the single goal of the environmental movement when the global warming fraud began in the late 1980s. It accelerated with the UN Kyoto Protocol in 1997. The U.S. has never accepted the Protocol and those nations that did have since discovered that it’s been a very costly fraud.

Cap-and-Trade is a fraud. Let your senators know you oppose their vote for it. Any senator that does vote for it should be replaced if they are running for reelection in the November midterm elections.
Posted by Alan Caruba at 5:08 AM

Today, we had a guy who, after years of disputes over his taxes, was so angry with the government and the IRS that he set his home on fire with his family inside, and then flew his airplane into an IRS building. Meanwhile, we have an administration talking about "ramming" their controversial health care legislation through with the parliamentary procedure of "reconciliation" and using "executive order" to enact environmental laws that aren't supported by scientific evidence or the people. Are we are on the ragged edge of anarchy, or what? Call me nuts, but I sense that this country is sitting on a dry powder keg, with a very short fuse. If the Obama administration continues to thumb their noses at the American people, I fear things are going to get out of hand. I keep waiting for a voice of reason to come forward in the Democratic Party, but so far, all they seem to be able to do is jump ship and head home with their tails between their legs. Let's hope someone steps forward and throws the brakes on this tyranny before it's too late....

So where do France and Russia put all their nuclear waste? Or do they reprocess it and use it to fuel reactors? Why isn't this done in the US?

J: I do not know what France and Russia do. Presumably they either store or reprocess it. I suspect the latter.

I find it particularly interesting that Obama promised support for nuclear power in the SOTU address, meanwhile the Yucca Mountain facility gets nixed. Just another example of why we have to pay attention to what he does, not what he says, if we want to know where he's leading us. If we see a new nuke in the next decade, I'll eat my hat ....

Yes, it would be much wiser to reprocess spent fuel. Or even better to use breeder reactors, that produce 90% less waste than traditional reactor designs. However when at the end of the day, it is possible to reduce the amount and lifespan of nuclear waste by 90%, but the remaining 10% must be still stored somewhere. Note also this proposal, that removes funding for the 'fast spectrum' type of reprocessing research:
http://www.freerepublic.com/focus/f-news/2429274/posts

Both Japan and France produce a majority of their electric power from Nukes - they are small and relatively crowded countries that some how manage to store the waste safely and securely.

The problem of storing nuclear waste is made much, much easier in France because they aren't afraid to recycle spent fuel rods. See Recycling Nuclear Fuel: The French Do It, Why Can't Oui? from the Heritage Foundation.

Not to mention the suppression of Thorium reactors. AEC in the US decided against their use as it would impact the US nuclear weapons program. http://peswiki.com/index.php/Directory:Thorium_Reactors

Solution to the sabre-rattling with Iran?

For the record, the reason why Yucca Mountain is even needed is because of the ban on reprocessing our nuclear waste in the first place. If we reprocessed it the amount of actual waste from a marginally current nuclear reactor would be almost 0 because it can be reprocessed, and put back into the core.

Hence the issues go even further into the "this is not an issue" group.

Luckily the terrorist that flew into the IRS building didn't fly into a reactor, eh?

France is a socialist country. Their energy is provided by the state. Their power grid is linked into the socialist EU. Their nuclear industry is successful because of their socialist government.

France doesn't know what to do with their waste either. They send some of their waste to Russia. Russian and French waste is stored in Serbia which has a history of leaking.

However, much of France's waste is in a temporary storage area for a few decades while they try to find a permanent site.

Wall Street would not fund nuclear power in the US, even when times were good. To make it work in the US requires this weird hybrid of socializing the costs and privatizing the profits that has evolved over the last several decades. The government will have to pay for it and private investors will walk away with the profits.

It seems to me that nuclear power requires socialism. I thought socialism was bad?

Also, old nuclear plants are already being spun off into underfunded companies that will never be able to pay for the removal of the older reactors once they are shut down.

Yucca Mountain was found to be built on a fault line which raised concerns about the long term safety of this site.

I don't think I want politicians deciding what to do with nuclear waste. Probably not scientists either. And certainly not businessmen. Somehow, shipping it to the Russians doesn't sound like a good choice, so I'm left concluding that we should avoid creating it. If we can't clean up our mess, let's not create it. I think I learned that in pre-school.

Paul:
Nuclear power provides about 20% of the nation's electricity currently. It provides most of France's energy needs.

You propose to do nothing. Nothing is not an answer.

I don't propose we "do nothing", but I do propose we do not do things that we do not adequately understand. And particularly not do things that involve well known and serious risks that have no current solution. What's the old saying, "act in haste, repent in leisure." Never thought I'd hear the french used as an example we should follow. What next, high speed trains and massive farm subsidies?