Time Magazine Has a Problem with the Truth about Global Warming 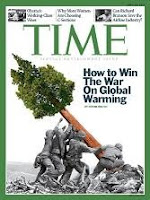 Bryan Walsh has a great career in public relations awaiting him. Unfortunately he is currently passing himself off as a journalist for Time Magazine.

PR, a profession I have enjoyed for several decades, is widely seen to “spin” facts to a client’s advantage and this is frequently the case. PR is advocacy. Journalism is supposed to be something else, i.e., the unbiased, objective reporting of the facts. Someone needs to explain this to Bryan.

In an article titled “Explaining a Global Climate Panel’s Key Missteps”, Bryan barely pretends to be a journalist as he engages in whitewashing some widely known facts about the Intergovernmental Panel on Climate Change (IPCC), the United Nations' scam for the propagation of the huge global warming hoax.

Bryan correctly notes that the IPCC was “one of the most respected organizations in the world” and, in October 2007, had shared a Nobel Peace Prize with Al Gore, a famed global warming blowhard and fabulist best known for predicting the end of the world next Tuesday.

Bryan noted that the Norwegian Nobel committee had “lauded the IPCC’s fourth assessment report in 2007 as creating an ever broader consensus about the connection between human activities and global warming.” Note that these are stated as facts, but in truth there never was a “consensus” in the worldwide community of climatologists and meteorologists, and other scientists.

Indeed, there have been three international conferences to debunk global warming, all sponsored by the Heartland Institute, a Chicago-based non-profit, free market think tank that brought together some of the world’s leading scientists who participated in seminars and gave addresses that were illustrated by graphs and other data that debunked global warming. A fourth conference is scheduled in May and, who knows, some members of the U.S. media might actually attend and report the truth this time?

The assertion that there is a connection between human activities and the non-existent global warming doesn’t even meet the lowest standard of journalistic accuracy. There is no connection. None has ever been proven despite the claims. In general terms, the Earth’s climate is determined by the sun, the oceans, and other factors of such magnitude as to suggest that an ant hill poses a threat to a skyscraper.

Bryan finally got around to mentioning that “over the past week or two, the IPCC has seen its reputation for impartiality and accuracy take serious hits.” Hello! Those hits have been around for years, but the leak of emails in November 2009 between the key players in the global warming fraud unleashed a tsunami of revelations about the way the IPCC relied on deliberately distorted “facts” and strove to suppress the publication of the truth in leading science publications. It wasn’t over the past week or two unless Bryan has been in a deep comma for three months.

Calls for the resignation of IPCC chairman, Rajendra Pachauri, were noted. He has been under fire because he knew in advance of the Copenhagen conference that claims about melting Himalayan glaciers were bogus. Plaintively, Bryan asked, “What’s wrong with the IPCC?” and then answered saying, “To some degree, it’s a victim of its own size.”

Wrong again. The IPCC may have claimed that it had some 2,500 scientists participating, but the real “work” of the IPCC was undertaken by a close knit group of global warming fraudsters, several of whom are under investigation. They include Prof. Phil Jones of the Climate Research Unit (CRU) that provided key data regarding the planet’s temperatures---which always seemed to be rising exponentially.

Others included Prof. Michael Mann of Penn State University, a paleoclimatologist famed for his “hockey stick” graph of temperatures over the past 1,000 years that managed to overlook the Little Ice Age from 1300 to 1850. Joining the merry pranksters was Prof. Keith Briffa, another CRU researcher, who dished up a tree ring theory that confirmed global warming.

Dr. Kevin Trenberth of the National Center for Atmospheric Research, Boulder, Colorado, linked increased hurricane activity to global warming, but was probably hard pressed to explain those years when it did not increase. There are others like Dr. James Hansen, head of NASA’s Goddard Institute that got the whole ball rolling in 1986 when he told Congress that global warming would destroy the Earth if we didn’t put an end to all energy use that generated greenhouse gas emissions.

Instead of noting the misdeeds of these and others closely affiliated with the IPCC, Bryan quoted a scientist from the Scripps Institution of Oceanography, a “lead author on the 2007 IPCC report.” And we know how eager Richard Somerville must have been to suggest it might have been a thousand pages of nonsense. Bryan also quoted Peter Frumhoff of the left-learning Union of Concerned Scientists who repeated the tired IPCC message that “there is no debate about the core urgency” of global warming.

No debate? The debate has been raging for decades. Bryan, however, just plowed on, offering one excuse after another to cover the IPCC’s serious breach of ethics and accuracy, concluding that its “self-assessment” after each report and “the pressure…to be flawless” is the problem,but not the lies it has been putting forth since 1988.

“But that’s exactly the sort of information policymakers will need to prepare for climate change going forward,” said Bryan.

No, policymakers need is real science, proven science. And the IPCC “science” about global warming, now rebranded as "climate change", is an insult to all real scientists and, beyond them, to a worldwide public that was consistently led to believe a massive hoax.

Time, Newsweek, and countless others in the mainstream media have been co-conspirators in the global warming fraud. It is time to end this shameful blot on journalism and begin to report facts, not apocalyptic fantasy.
Posted by Alan Caruba at 7:00 AM

It may not matter in any case. Seems that by mid-century we will all be starved to death because there will be nowhere to raise plants -

"The conference heard world soil, including European and British soils, could vanish within about 60 years..."

Oh yes, it is so true...the Earth is running out of everything...except idiotic "scientists" trying to justify their salaries or grants.

In a world with real threats, this kind of thing is obscene.

Time magazine is a sad shadow of its former self. I cancelled my subscription mid way through last year, having got entirely sick of their advocacy "journalism". When I pick it up in waiting rooms, it's an anorexic weakling, starving by the day.

I think it's doomed.

...further to the above Alan, I would appreciate a mention on your blogroll.

Arydale, you have earned a spot on my favorite blogs and are now linked.

It's also an insult to anyone with half a brain. Mr. Caruba, it's funny, but today my son and I were learning about the lungs for his body science lessons. He learned that we breath in oxygen and breath out carbon dyoxide. He said, "Isn't that what people say cause global warming?" I said yes, that's what they claim. I asked him do you know what "breathes in" carbon dyoxide which we breath out? He didn't know, so I told him plants and trees. I said they "breathe" it in, and produce...and he said "oxygen!" You could see the wheels turning in his head. He knows that I don't believe in this crud, but he is learning on his own, why. I sure hope there are more and more folks who will homeschool- the next few generations need leaders who learned for themselves, and not just following and processing the drivel that's being taught in government schools.
I know this article you've written has nothing to do with homeschooling, but I just can't help but find it interesting that so many people believe homeschooled kids are indoctrinated by their parent's views (in my case, a religious right fanatic/terrorist, and a denier) but given all the information our kids get through tv, news and other sources, then what they learn through studying- they are able to come to their own conclusion- which so happens to be opposite to what the government teaches.
OK I'm done :-) Thank you Mr. Caruba- God Bless!

Years from now, Carolyn, your son will realize how incredibly fortunate he was to have been home schooled and to have you as his mother.

Hansen got the ball rolling in 1988not 1986, when he attended a hearing in Washington on a hot summer day with Gore by his side, and the airconditioner intentionally on low....
Great article Alan!

Alan, it's not only wayward journalists who prostitute themselves before the alter of baloney, pseudo-science and hysteria.
Our very own Prince of Wales is firmly amongst this dangerously misinformed crowd.
According to Dr Richard North of the popular UK blog EU Referendum, this gaff-prone foolish prince has expressed, to The Scotsman newspaper, his dismay and alarm at those who question the ‘science’ behind climate change. He attacked skeptics, saying that the evidence for AGM was overwhelming and saying that CO2 levels are 40 percent higher than before the Industrial Revolution. He spoke of the alarming messages from explorers such as Pen Hadlow, concerning melting polar regions (…. and we know about Hadlow’s abortive and discredited attempt at reaching the North Pole in a small boat, his rescue and whose attempts to get ice cores ended in farce …..)
When such a person as Charles gets on a bandwagon the Establishment listens and takes him seriously, and the political implications can be immense and far reaching.
Because of the arrogance and standing of such fools the sycophantic political claque following along like the buffoons they are, policies are put in place which is heading Britain into ‘candle and cave’ territory. Of course, Brown has sold-off the family silver – the nuclear power production industry – totally ignoring the increasing possibility of a major era of global cooling which will be far more devastating and malign than a benign and modest warming will impart to us.
Hence, arch-clown Gordon Brown has embarked upon a completely mad and unrealistic plan to put up some 10,000 windmills in and around Britain by 2020, the practical impossibility of which has not permeated the vacant space between his ears.
And as the mad utterances emanate from our “future king” maybe that will remain his title – especially as the Thames begins to freeze-over.

Clive, from this side of the pond, it appears that England is afflicted with buffoons.

By the time the IPCC gets done retracting all of the phony papers they will end up with a one page report that says "we really, really believe in man made global warming".

As for the topsoil disappearing, they've been saying that since the '50s and '60s. No farmer in his right mind would stand by and watch his topsoil disappear without doing something to stop it. Farmers do that as a matter of course.

Welcome Choey...and, yes, you are so right.